No to NATO! Enters the Political Agenda

The murmurs against NATO have been growing into a crescendo in recent years, especially after the lies to Russia, the murderous campaign against Serbia and the free hand given to the drugs growers in Afghanistan where under NATO’s guidance heroin production has increased not by four, but by forty times. Now a worldwide anti-NATO wave has entered the political agenda. 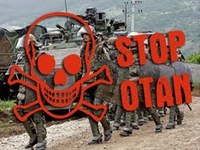 No to NATO! Enters the Political Agenda

Thirty-three political parties from twenty-seven countries representing all the continents of the world have signed a declaration against NATO, denouncing it as an imperialist and intrusive, meddlesome organism which panders to the interests of those who control the arms lobby and does nothing to solve real issues, while at the same time it is a supra-national unelected body which controls the foreign policy of its member states (is this constitutional?) and siphons off funds which are much needed for social issues.

In a document entitled “For Peace! Against NATO!” the movement was launched on April 1, undersigned by workers’ and communist parties, declaring that military expenditure in the USA and EU have reached record levels, while the EU hides behind the Treaty of Lisbon as it implants itself as the military block of NATO in Europe. Moreover, what exactly does NATO do?

“The Palestinian question is still unsolved, as is the question of Western Sahara while imperialist crimes go unpunished,” declares the declaration while attempts have been made to draw lines on maps (Kosovo being a prime example of the violation of international law and one of the power of NATO over national legislative procedures).

In the name of fighting terrorism, NATO has launched a wave of intolerance which has committed crimes against humanity, economic crimes, crimes against democracy as its real objective is reached: using the alliance as a means for the USA to grab the reins of power contained in the world’s energy resources, to control new technologies and to complete military and geo-strategic domination of the globe while markets and peoples are controlled, moulded and used.

NATO has managed to perpetuate itself under the falsity “new global challenges” after the “reds under the beds” myth disappeared with the voluntary institutional dissolution of the Soviet Union (against the wills of its peoples). And it is this new strategy that NATO will take to Lisbon, Portugal for its Summit in November.

As NATO spends trillions of dollars in developing new weapons systems while it looks for new wars to test them out (the Pentagon gives contracts for weaponry tested in battle), a new political wave has taken shape and is visible today on the political agenda.

Against NATO stands a determined new political order which fights for social justice, which fights for a future international community living side by side in peace, with the community of nations respecting each others’ cultures. Against NATO stands a demand for true nuclear disarmament and the complete destruction of chemical and biological arsenals.

Against NATO stands an appeal for the end of all military bases on foreign soil.

Against NATO stands a demand for the total dissolution of this organization, for the end to provocation and interference in Latin America and the Caribbean.

In short, NATO is at the basis of all the evils we see today in the international community. NATO lied to Russia, proclaiming it would not expand eastwards. It promptly did. If there is one universal lesson that the history book taught us, it is never trust a liar.