He who lives by the sword…this is the old adage that came home to roost for Eugene Terre’Blanche, the leader of the quasi-defunct AWB, a white rights movement in South Africa. His murder, though not politically or racially motivated, however, could give his movement the justification it needed to rekindle its activity in a country with singular and horrific social problems. 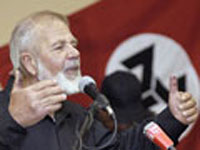 Eugene Ney Terre’Blanche, born in 1941, was descended from French settlers, the grandson of Etienne Terre'Blanche who fought for the Boers (Farmers) against the British and son of a Lieutenant Colonel in the SADF. A member of the elite police force, chosen to guard the Prime Minister, John Vorster, Eugene Terre’Blanche founded the Afrikaner Resistance Movement (AWB, Afrikaner Weerstadsbeweging) in 1970, a movement which defended the creation of three white homeland states (Volkstaat), separating from South Africa. At its peak, the AWB had 70,000 members among the 3.4 million Boers in South Africa.

However, with the Mandela wave came a racial and political revolution in South Africa and this wave swept Terre’Blanche and his supporters from any semblance of credibility, even before he was arrested in 1997 and jailed for six years for the attempted murder of a farm worker on his property in Ventersdorp in the north of the country. When he was released in 2004, he slipped into virtual obscurity, despite his attempt last year to make a comeback, vowing to apply to the UNO to create a white homeland in South Africa.

The fact that he and his AWB had been implicated in terrorist activities in the run-up to the first democratic elections in 1994, in which 21 people were killed and hundreds injured, a fact that he accepted publicly before the Truth and Reconciliation Commission was the first step in the beginning of his demise; his credibility, and that of his movement, all but disappeared after the abject failure of his invasion of the tribal homeland of Bophuthatswana in 1994, in which the AWB was routed by the local police (aided some say by South African intelligence).

As South Africa enjoyed a sensible government policy of inclusion, basing governance on competence and not on colour, Terre’Blanche became more and more a figure of a bygone age.

His death, perpetrated by two farm workers who claim they were not paid, using a panga (hunting knife) and a knobkerrie (a club), a cowardly attack while he was taking a post-lunch nap, may be exactly what he and his movement were looking for to rekindle their outdated and unacceptable position.

It comes at a time when a white student (Anika Tikkie Smit) was attacked at home and her hands sawn off, it comes at a time when an ANC youth leader, Julius Malema, is singing a rap song Kill the Boer. It comes ten weeks before South Africa is to host the FIFA World Cup and its authorities have been saying for two years that everything is rosy.

It is not. Over 3,000 white farmers have been murdered since 1994 (albeit only 2 per cent of these due to racial or political motives). In some areas of South Africa, nearly 80% of women state that sexual violence is very common. South Africa has the second highest murder rate per capita in the world after Columbia, the second worst crime rate with firearms, the worst murder rate of law enforcement officers.

Many honest hard-working South Africans state that the crime rate in their country is totally unacceptable and has been spiralling downwards since the ANC came into power in the 1990s.

If Terre’Blanche was a racist bigot, then so is Julius Malema. How would the ANC react if a white group started disseminating a rap song “Kill the Black”? While it is not politically expedient to mention that things are not rosy and wonderful in Africa, and while it may not be “politically correct” in today’s world, it is a fact, it is the truth and this word is PRAVDA, in Russian.

Like it or lump it, South Africa has problems which if they are not addressed, will result in this country becoming a second Zimbabwe.