USA’s Aerojet, a major rocket and missile propulsion manufacturer, plans to purchase old rocket engines from Russia, news agencies reported on March 31. The engines will be reportedly used at the International Space Station. It goes about the purchase of tens of soviet NK-33 engines made 40 years ago within the scope of the Soviet lunar exploration program. 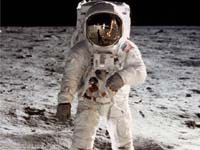 The program was shut down in the beginning of the 1970s in spite of the fact that the USSR was technically prepared to land cosmonauts on the moon. Engineers assembled dozes of rocket engines, but all the works were stopped. Now it seems that the USSR’s former competitor is interested in using the developments of Soviet scientists in the field of space exploration.

Spokespeople for Aerojet acknowledge that they were satisfied with test results of the Soviet engines. The cost of the possible contract has not been exposed yet.

Pavel Zolotarev, an expert with the Institute for the USA and Canada, said in an interview with Pravda.Ru that the USSR had always designed very good engines.

“These engines are ready for space flights – they only require a little upgrade. The US program was based on reusable engines, and it turned out to be less effective than the program of disposable engines developed in the Soviet Union,” the scientist said.

“They buy the engines which we now use on Proton boosters. There is nothing surprising about that because Soviet engines are still considered the best in the whole world,” he said.

Alexander Mordovin, an expert with the Council for Russia’s Defense Politics, stated that there was no hidden motive in the above-mentioned contract.

“It is just a common contract for the Americans. Why would you make up a monkey which you already have in a cage? The Americans follow this principle in their space exploration program. The Soviet engines fit NASA contracts. To crown it all, it is much cheaper to buy ready engines than spend billions on creating new ones,” the scientist said.

Konstantin Sivkov of the Academy for Geopolitical Sciences believes that the intention to purchase the Soviet engines testifies to the USA’s intention to conquer the moon again.

“Mankind needs more resources. The Americans seriously consider an opportunity to develop the lunar resources, although nobody knows if they can succeed at that. Since they want to use old Soviet engines, it may mean that they have not achieved much during the four decades,” the scientist concluded.

“The West, particularly the USA, is a civilization of packages. They can give a very good visual presentation of things, but the package does not imply good quality of products. US space products often lagged behind Soviet products especially in the space industry. In the USSR the situation was different. The quality of packaging was poor, but the quality of products was superb,” Mr. Sivkov said.