Sarah Tea Party Palin, the Last Resort of the GOP

What is wrong with the Republican Party of the United States of America? After eight long years of the Bush regime insulting every fibre of the Founding Fathers’ precepts, the Grand Old Party is now reduced to one screaming and intellectually challenged female called Sarah Palin. 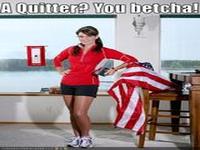 Sarah Tea Party Palin, the Last Resort of the GOP

"We realize that more and more Americans are starting to see the light there and understand the contrast. And we talk a lot about, OK, we're confident that we're going to win on Tuesday, so from there, the first 100 days, how are we going to kick in the plan that will get this economy back on the right track and really shore up the strategies that we need over in Iraq and Iran to win these wars?" Sarah Palin, suggesting we are at war with Iran , FOX News interview, Nov. 1, 2008

Whoops! Not so worldly-wise, eh? Hey this is the same woman who said:

"As Putin rears his head and comes into the air space of the United States of America, where– where do they go? It's Alaska. It's just right over the border." --Sarah Palin, explaining why Alaska's proximity to Russia gives her foreign policy experience, interview with CBS's Katie Couric, Sept. 24, 2008

Did she really say that? No actually what she said was:

"Well, it certainly does because our -- our next door neighbors are foreign countries. They're in the state that I am the executive of. And there in Russia ... We have trade missions back and forth. We-- we do-- it's very important when you consider even national security issues with Russia as Putin rears his head and comes into the air space of the United States of America, where-- where do they go? It's Alaska. It's just right over the border. It is-- from Alaska that we send those out to make sure that an eye is being kept on this very powerful nation, Russia, because they are right there. They are right next to-- to our state." --Sarah Palin, asked by Katie Couric how Alaska's proximity to Russia gives her foreign policy experience, CBS News interview, Sept. 24, 2008

So not that hot on foreign policy. Iraq, Iran, just a letter’s difference. And what an intelligent statement on prime Minister Putin, referred to as “they”. Hmmm.

Presidential material in the making here most definitely. Or is it definately? So what about domestic policy?

Pretty impressive stuff. Or how about…

"We grow good people in our small towns, with honesty and sincerity and dignity." --Sarah Palin, in her speech at the Republican Convention, quoting the fascist right-wing columnist Westbrook Pegler , an avowed racist and anti-Semite who once expressed his hope that Robert F. Kennedy would be assassinated

"I'm the mayor, I can do whatever I want until the courts tell me I can't.'" --Sarah Palin, as quoted by former City Council Member Nick Carney, after he raised objections about the $50,000 she spent renovating the mayor's office without approval of the city council.

Sarah Palin, on writing notes on her hand during her Tea Party convention speech: "I didn't really had a good answer, as so often -- is me. But then somebody sent me the other day, Isaiah 49:16, and you need to go home and look it up. Before you look it up, I'll tell you what it says though. It says, hey, if it was good enough for God, scribbling on the palm of his hand, it's good enough for me, for us. He says, in that passage, 'I wrote your name on the palm of my hand to remember you,' and I'm like, 'Okay, I'm in good company.'" (March 5, 2010)

One insolent, ignorant backstreet guttersnipe with as much intelligence in her brain as a squashed syphilitic slug. A sawdust-headed simpleton who cannot even manage her own family, the failed ex-Governor of Alaska now drums up support for John PharmaLobby McCain. So when this….female…opines that Obama’s healthcare plan is evil, when it brings affordable healthcare to 30 million Americans, one begins to question, who is behind the death threats to those who backed the plan?

And as for the GOP, they can spend trillions of dollars on getting Americans killed in Iraq and Afghanistan but they cannot spare a few hundred thousand to keep Americans alive at home?