U.S. and Its Human Rights: 640 Attempts to Kill Fidel

Now that the United States and its allies in their media campaign against Cuba, proclaim themselves defenders of human life, Cubans remember that this can be denied, among other things, the 640 attempts to assassinate Fidel Castro.  It is no secret that the unusual number of attempts on the life of the leader of a country was part of the official strategy drawn up by the highest U.S. authorities and its implementation was ordered by its intelligence and espionage agencies. 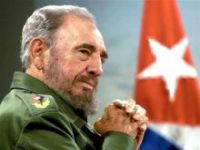 U.S. and Its Human Rights: 640 Attempts to Kill Fidel

These days, the 50th anniversary of the directive signed by then President of the United States, Dwight Eusenhower, was recalled, in March 1960, giving the green light to all covert operations to overthrow the Cuban government, between which terrorist attacks always stood out, and a project for the physical elimination of Fidel Castro.

Documents made public from archives including the Central Intelligence Agency (CIA), confessions of prisoners in efforts to consummate the facts or those who have ventured into the Bay of Pigs, parliamentary hearings and a half-dozen informative films showing these plans are the best existing evidence.

The unusual variety of forms chosen to eliminate the leader of the Cuban revolution would seem like a soap novelistic element if they had not constituted concrete actions adopted at the highest level in the United States.

From trying to poison Fidel Castro during the consumption of food or a cigar, up to buying the betrayal of someone who would kill him during a rally at the University of Havana, plus many other forms of homicide, all attempts were frustrated by the efficiency of the security of the Cuban state.

The conspiracies to achieve this abroad were extremely dangerous and unsuccessful. Their authors have always been protected by the U.S. authorities who ordered assassination projects of such magnitude.

One of the last ones was prepared in Panama, at the conclusion of a Pan-American Summit of Heads of State and Government, frustrated by the denunciation of Cuba and that, if it had materialized, would have cost an enormous number of lives, while blasting the auditorium of the University in which Fidel Castro would talk to a crowd of students.

Ali appeared as an author, but once again, the terrorist aquaintance of Luis Posada Carriles, arrested, sentenced by a judge and pardoned by the then Panamanian government and received with open arms by terrorist groups in Miami, to continue their old habits.

These hundreds of murder projects did not succeed, did not seem to ever violate the right to life for those who ordered them, organized and executed, and never lost hope of being able to consummate them.

For Cubans, it's easy to identify them now as they who run the media campaign against Cuba and who proclaim themselves defenders of human rights, followed by those who never lift a finger to condemn such as state terrorism against the West Indian nation .