It has been already two weeks since the day of the parliamentary elections in Iraq. The result of the vote is still unknown. The president of the nation, the chairman of the Kurdish community Jalal Talabani and Prime Minister Nouri al-Maliki, a Shiite, demand the votes be recounted. 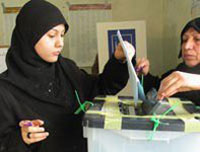 The Central Election Committee of Iraq rejected the requirement and claimed that a recount would take a lot of time.

The vote took place on March 7, but the counting of votes in Iraq is a very slow process. Prime Minister Maliki was satisfied with the leadership of The State of Law bloc, but the situation changed on March 20, when 92 percent of ballot papers were processed.

Opposition bloc Al-Iraqiya chaired my the former prime minister of the nation, Ayad Allawi, a Shiite, stole the leadership from the State of Law. Unlike Maliki’s coalition, Al-Iraqiya is a secular bloc, which received the support from both Sunni and Shiite voters. For the time being, Allawi is 8,000 votes ahead of al-Maliki. If Al-Iraqiya keeps the leadership, its head will have all chances to retrieve the prime minister’s office.

Al-Iraqiya’s spokespeople believe that the appeal from the Iraqi leaders to recount the votes. They claim that the president and the prime minister want to put pressure on the election committee and fabricate the results to the benefit of the State of Law coalition.

Interim results are as follows: two leading parties may count on 90 and 325 seats each. The Iraqi National Alliance, a Shiite group, comes next (68 seats). Al-Tawafuq (Change), a Sunni bloc, which held 44 mandates in the previous parliament, now has only six.

Kurdistan Bloc is the leader in Iraqi Kurdistan – 39 seats. This is 16 percent less than the bloc had in 2005.

The structure of the ruling coalition in Iraq is the biggest question at the moment. The first variant looks as follows: Al-Maliki’s State of Law, the Iraqi National Alliance and Kurdistan Bloc.

In this case, however, the Sunni community will not be represented in the nation’s authorities. Al-Iraqiya therefore has all chances to form the new coalition for it represents both the Shiite and the Sunni groups.

The winner of the Iraqi elections is to be announced on March 26. Any result will trigger protest actions. The announcement will obviously bring no peace to the war-torn country.

Russia Today: US funds sent from Iraq to al-Qaeda