Ukraine’s No to NATO

A statement in yesterday’s parliamentary newspaper in Ukraine affirmed categorically that the new governing coalition will pass a law which will legislate against joining military alliances. The NATO project for the ex-orange State has failed, lies in shreds and tatters and is fit for the dustbin. The Yushchenko dream is shattered. 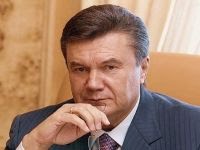 Ukraine’s No to NATO

This move can only be described as an abject failure for NATO and its continued plans to expand eastwards despite having given pledges to Moscow that this would not happen after the Warsaw Pact was disbanded. Moreover, apart from being a blow for NATO’s plans of intrusion, it can also only be described as a resounding success for Moscow, given that a recent military doctrine published by Russia described NATO’s expansion eastwards as its main foreign policy concern.

Predictably, Yulia Timoshenko is moving in the wings stirring up trouble, trying to form a united opposition, despite having been dropped by the Ukrainian people. However, the name of Ukraine’s Prime Minister under President Yanukovich is not Yulia Timoshenko, who today is simply another parliamentarian. The name of Ukraine’s Prime Minister, conformed last week, is Mykola Azarov.

Yanukovich’s statement of intent against joining military alliances confirms the new strategy and direction chosen by Kiev, namely to foster good relations with Russia and with Europe and to follow this path does not mean that one side has necessarily to be antagonistic to the other. Why should joining the European Union be a move hostile to Moscow? Why should Ukraine join NATO (an out-dated clique of corporate elitists serving as a gentleman’s club for Washington’s arms lobby) or for that matter the CSTO, the Collective Security Treaty Organization, Moscow’s answer to it?

Moscow has always claimed that Ukraine’s policy is for Kiev to form, believing in the adage that for every action, there is a possible reaction. With Yanukovich, predictably, comes a pragmatic and sensible, balanced foreign policy.

Yesterday both sides grew closer with bilateral discussions on how to improve relations at a meeting between the Russian and Ukrainian Foreign Ministers (Sergei Lavrov and Konstantin Grishchenko, ex-Ambassador to Russia) in Moscow, which resulted in the signing of a ministerial cooperation plan for 2010. Russia now aims to make up for lost time after the Orange Revolution set Ukraine in a void for four years.

Sergei Lavrov mentioned the proposal launched by President Yanukovich on his visit to Moscow on March 5, to stage a strategic arms reduction summit between the USA and Russian Federation in Ukraine, stating that this is for the Presidents to decide. The indications are however that Moscow would favour such a move to help highlight Viktor Yanukovich’s role in making Kiev a key European capital.