Fascism in Europe Acceptable as Long as It Angers Russia

On March 16th, Latvia (one of the three Baltic States, a former member of the Soviet Union) celebrates the establishment of the 15th and the 19th Latvian Waffen SS divisions. SS veterans and their young followers traditionally march along the streets of Riga, the nation’s capital. Members of Russian-speaking and anti-fascist organizations protest against such meetings every year. The opposition often leads to clashes with the police and fights between political adversaries. 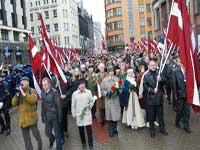 Fascism in Europe Acceptable as Long as It Angers Russia

This year, the story began on March 5th, when the Riga administration banned the march of elderly SS-men and their young supporters. The authorities also banned any public actions of antifascist organizations. Two nationalist organizations went to court demanding the ban be overturned.

As a matter of fact, the authorities of Riga repeated their last year’s decision. However, the meetings of SS veterans took place in the city anyway, and the police did not do a thing to stop them. The Supreme Court of Latvia canceled last year’s ban on March 10 and sent the case to a first instance court. No one has canceled the decision this year. Therefore, SS legionaries have no right to march along the streets of Riga this year.

Riga ’s Russian-speaking mayor Nil Ushakov also believes the meetings of SS veterans in the country must be banned.

“We thoroughly support freedom of speech as long as there is no danger to security. Who can guarantee security in this situation ? Who is going to be responsible ? ” the official said.

However, it turns out that officials from the Latvian administration share a different point of view. Internal Affairs Minister Linda Murniece said last week that the march of SS veterans should not be banned.

“We must respect the organizations for which March 16th is a significant date,” she said.

Murniece believes that it would be enough to make the followers and adversaries of SS-men organize their actions in different parts of the city.

Latvian law-enforcement agencies are very busy before this event. For some reason, they only struggle against antifascist activists. A commissar of a Russian youth movement Nashi, Mark Siryk, was denied entry to Latvia on March 13. The decision violated the regulation of the Schengen Agreement about the freedom of travel inside the EU.

Estonia ’s antifascist movement Night Watch intends to send its activists to Riga despite the strengthening of the border control.

“We are satisfied with the decision of the Riga administration to ban the march of former SS legionaries. However, the march took place last year despite a similar prohibition, and the police did not do anything to stop it from happening. The antifascists, who tried to interrupt the march, were detained,” a statement from Night Watch said.

Antifascists have reasons for concerns. Latvian President Valdis Zatlers has recently released a statement which can be interpreted differently.

“This is the competence of the Riga administration, but I would like to remind that we live in a free country, and we must guarantee the right for such meetings. Two organizations went to court. We must guarantee many things if we want to be a free state,” the president said.

SS-men and their followers can use the president’s support to start their march. They will not have to fear the police: they turn a blind eye on such events. Activists of antifascist movements could never enjoy the police treatment: they would often be arrested and placed in detention centers.

The story with SS marches on March 16th repeats every year. It is worthy of note that Latvia has been a member of the European Union for almost six years. The EU could solve the problem once and for all. European officials could make an official warning to the Latvian administration. In Germany, a march of SS veterans entails criminal persecution. Brussels keeps silent, Latvia takes this silence as a token of agreement, and elderly Nazis march to the Monument of Freedom like true heroes.

Vladimir Zharikhin, deputy director of the Institute for the Commonwealth of Independent States, said that the situation in Riga was rather complicated.

“We will see how the story unfolds. The European Union was supposed to say something on the matter. However, Latvia’s anti-Russian politics is good for Europe. This fact dominates over human values, and the European Union prefers not to say anything at the time when SS-men march along the streets of Riga,” the specialist told Pravda.Ru.

Sergey Fyodorov, an expert with the Institute for Europe of the Russian Academy of Sciences, said that the problem with marches of SS legionaries in Latvia reappears every year.

“European media outlets say that such events should be prohibited, although officials say nothing on the matter. All their explanations seem to be vague. One can be jailed for such actions in France or Germany, and it seems that it is not a rule for Latvia. European officials often say that they understand the cult of Nazism in the Baltic States. They say that the “Soviet occupation” for Latvians and Estonians was much worse than the German occupation. Alas, we have to acknowledge that the European Union simply follows the double standards politics at this point,” the specialist said.