Former presidential adviser Karl Rove defended extreme interrogation techniques because, as he said, it contributed to saving lives of U.S. soldiers. According to the principal adviser to former President George W. Bush, methods such as "immersion" (waterboarding) contributed valuable intelligence material to the Department of Defense in times of war. 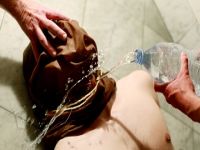 “I feel proud of U.S. soldiers who have applied these techniques against our enemies, although some authorities consider them torture,” noted Rove. In January 2009, President Obama banned the use of cruel treatment of detainees and overruled the orders of the Bush era which finds that Republican lawyers certified the procedures.

One might wonder if Rove's lack of character is the result of painful experiences growing up in a dysfunctional family which he speaks about at the beginning of the book. Rove delves into his relationship with his mother, Reba Wood Rove, who abandoned the family. Her body was found by a police officer after she had taped a hose to the exhaust pipe of her pickup truck and died of carbon monoxide poisoning.

The his book, Courage and Consequence: My Life as a Conservative in the Fight, there is no apology for Rove's role in committing America to war in Iraq on the basis of weapons of mass destruction that were never found and never existed. He concedes that it would have been unlikely that the United States and its allies would have waged war without finding weapons of mass destruction.

Rove admits only one significant mistake as an adviser: failing to insist that Mr. Bush should respond more forcefully to accusations that he lied about prewar intelligence on Iraq. “The charge that Bush lied was itself a lie,” he writes. “We felt it was beneath the dignity of the President to refute such outlandish charges. If you wrestle with pigs . . . you get muddy.”

Despite millions of words of newsprint, endless government probes in numerous countries and hours upon hours of TV reports proving the opposite, Rove stands by the idea that President George W Bush invaded Iraq reluctantly. He also denies Bush condoned torture. "He did just the opposite," Rove wrote.

However, earlier this year the United States government decided to dismiss the lawyers who justified the need to torture prisoners for "the good of national security." The lawyers were very active during the Bush administration and had been marked by an ethics committee because of their unscrupulous professional behavior.

The acquittal of John Yoo and Jay Bybee, first mentioned by Newsweek magazine, has caused the ire of several organizations that defend civil rights and other pacifist community groups.

Basically Rove tries to whitewash and sanitize the image of Bush to the bitter end, but fails miserably in the attempt. He risibly described the two terms of the Bush administration as "impressive, durable and significant." Interestingly as well, Rove was known as "Bush's brain" which any normal person would recognize as not a particularly desirable thing to be called.