The French Are Glad to Die for Love

The French again have reasons to discuss the private life of their President Nicolas Sarkozy and his wife Carla Bruni. It is rumored that the couple is about to break up. It was also said that both Sarkozy and Bruni already have new partners. For the time being, Bruni, a singer and a former model, rejects the rumors. However, the rumors may eventually turn out to be true taking into consideration the passionate personal life of each of the famous spouses. 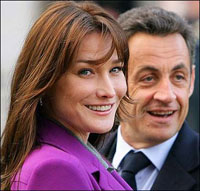 The French Are Glad to Die for Love

Articles about the love affairs in the Sarkozy-Bruni family appeared in the French media on March 10. The husband and wife reportedly cheat on each other and have their own love affairs. It was particularly said that Sarkozy, 55, has an affairs with Chantal Jouanno, a 40-year-old minister for ecology. Bruni, 43, reportedly fell into pop singer Benjamin Biolay.

The rumors about the imminent end of Sarkozy’s marriage to Carla Bruni appeared in France right after their wedding. Many people mocked Sarkozy for wedding a woman who was 17 centimeters taller than him.

The thing is not about the height, of course. French newspapers wrote that Sarkozy and Bruni had very few common interests. Therefore, the media said, their marriage may last as long as Sarkozy remains the President of France.

As for Bruni, there is not much to say about her really. She has been making music during the recent years. Benjamin Biolay, a French musician, is her colleague at this point. It is not ruled out that the French lady feels more comfortable with the musician than she does with the president, who obviously has very little time to speak about art.

Carla Bruni appeared on Britain’s Sky News on March 10 and rejected the rumors. She described her love story with Sarkozy as a 'real fairy tale.'

“He would never have affairs. Have you ever seen a picture of him having an affair?”

“I guess marriage should be forever, but, um who knows what happens. I wish it was forever, that's my hope, but we could be dead tomorrow. The real fairy tale is how lucky, how incredibly lucky it was for me to fall in love at 40-years-old, and meeting someone that, you know, I could marry” she told Sky News.

'I must say that 99 per cent of things that people are saying are wrong... but it was always like that, even before my marriage. Some people invent, I guess. I don't really care, I don't really pay much attention to it, I must say,” she said.

Sarkozy married Bruni soon after he divorced his second wife, Cecilia, also a former model. She traded Sarkozy for another man and clearly described the reason for it: “He is a womanizer, cheap and ridiculous,” she said.

Sarkozy was obviously hurt. He won Cecilia’s heart in the middle of the 1990s. He said in the autumn of 2007 that if Cecilia would like to return she would have to be quick about it. “The list of those willing to take her place is long. I can conquer any woman,” he said.

She did not return, and Sarkozy had to spend some time alone.

As soon as the French media stopped discussing the president’s divorce, Sarkozy appeared in a company of a notorious model Carla Bruni. The two wedded each other on February 2, 2008 after a trip to Egypt.

Nicolas Sarkozy’s mother feared that the scandalous model could ruin the reputation of her son. Indeed, Bruni said in one of her interviews that she was unable to stand a monogamous relationship for a long time. The list of her lovers includes such famous men as Mick Jagger, Eric Clapton, Vincent Perez, Donald Trump and former French Prime Minister Laurent Fabius.

Carla comes from a wealthy family. She made a successful career in the modeling business. She began to appear on magazine covers at age 19 and quickly became one of the highest-earning models in the world. She became famous for her nude photographs. Many of them saw the light after she became the first lady of France.

It seems that this celebrity gossip pushes politics into the background in France again. There is probably something good about the story: French journalists are tired of writing about Sarkozy’s political and economic failures.