The Monstrous Regime of Uribe in Columbia

Has the policy of the United States of America changed substantially in Latin America? Judging by Washington’s close friend and ally, Alvaro Uribe of Columbia, no, it has not. Murder of opposition activists, disappearances, threats and of course torture are the modus operandi in fashion in Columbia, where the USA has built up a considerable military presence. So much for the USA’s “humane” foreign policy. 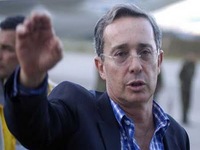 The Monstrous Regime of Uribe in Columbia

This is not good reading for those who are trying to digest their breakfasts, indeed it is not for people with weak stomachs or those who are easily impressionable. Attacks with acid in the eyes, burnings, horrific disfigurations are glaring tell-tale signs that Columbia is a horror state ruled by a monster, a pariah of Latin America, of the international community and a colossus of injustice, where all roads lead to Uribe, Washington’s ally and friend.

These cases, and many more, can be read in the book “Death is not Dumb”, a compilation drawn up by the National Trade Union School of the CUT (Trades Union Congress) in Medellin, capital of the Province of Antioquia, where Uribe was Governor before becoming President.

According to the book, which documents aggressions, threats and attacks against the physical integrity of Trade Unionists, every three days a Trade Union activist was murdered, there was a total of 2.704 assassinations between 1986 and 2009, a further 237 murder attempts against Trade Unionists and 190 disappearances; 4,418 death threats and 1,611 forced “removals” where activists had to abandon their homes and workplace due to pressure. The book connects these murders with Uribe, the one who opened up Columbia’s bases to the USA, the one whose past is intrinsically linked with paramilitary forces, death squadrons and narco-terrorism.

Guillermo Correa Montoya, one of the authors of the work, claims that in Columbia there has been a systematic, structured, selective and continued program of violence by the Uribe Government against the Trade Union movement, calling it Uribe’s “policy of extermination”.

During Uribe’s mandate in Medellin, it is claimed, 503 Trade Union activists were murdered, 37.9% of the total number of aggressions being perpetrated during the time he was Governor. The Columbian Committee of Jurists, which co-authored the book, states that there is a high degree of impunity among the murderers and criminals who carry out these attacks, because 98.3% of the murder cases are yet to be solved while the rate rises to 100% in the cases of disappearance, torture and home invasions.

In Columbia, tens of thousands of people have been murdered by the AUC (Autodefesas Unidas de Colombia), a fascist paramilitary organization which has admitted responsibility for 30,470 deaths in recent years. AUC is closely connected with large corporations with connections to Uribe, such as Chiquita (the banana monopoly). Chiquita also financed the extermination groups which worked under the façade of CONVIVIR, a group sponsored by Uribe himself (CONVIVIR were Cooperatives of Vigilance and Private Security used by the landowners supposedly to defend their latifundia against “terrorists” when the real terrorist attacks were perpetrated by these extermination groups).