The Ministry of Defense of Iraq said Friday that it will repay almost 20 thousand officers from the former army that had been removed from service after the fall of Saddam Hussein's regime in April 2003. According to a ministry statement, the order was issued by the Iraqi prime minister, Nouri al-Maliki, who is also commander in chief of the army, and will take effect in the next 28 days. 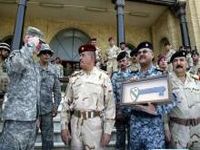 This measure was announced three days after news of the expulsion of 375 army officers, police and intelligence services allegedly linked to the Baath Party, now banned, that monopolized power during the years of Saddam Hussein.

After the fall of Saddam, the then transitional government issued a law banning from public life all the Iraqis with ties to Baath.

The spokesman of the Ministry of Defense, Mohammed al-Askari, assured today that Maliki had ordered the return of all officers who have requested reinstatement.

"The Ministry issued a recall in 2008 for officers and soldiers to return to the ranks of the army. Were made 20.4 thousand requests for return within and outside Iraq," said Askari.

Currently, Iraqi authorities will analyze the participation of more than 500 candidates allegedly linked to the Baath Party in elections in the next 7 days. Initially, the Iraqi government banned such applications, but the candidates appealed against a decision that affects mainly the Sunni minority.