Is the State Department Running the USA?

President Hugo Chavez is right. There is a sinister and underhanded, hidden and deceitful side to Washington’s diplomacy and the document we are about to reveal proves it. Who is in charge of the White House, President Barack Obama or Hillary Clinton and the arms and AIPAC lobbies? After reading this, there can be little doubt. 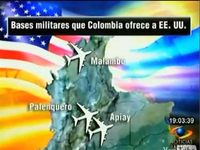 Is the State Department Running the USA?

Eva Golinger* discovered this document, “Department of the Air Force, Military Construction Program Fiscal Year 2010” drawn up in May of 2009, sent by the Pentagon to the US House of Congress. This is the document denounced by President Hugo Chavez at the UNASUL meeting on August 28, 2009 in Bariloche, regarding the US base at Palanquero, Columbia and proves the veracity of the philosophy General Mobility of the US Air Force in Latin America.

President Alvaro Uribe and Secretary of State Hillary “War Zone” Clinton are liars, according to this document. He, and the US State Department, stated on October 30 2009 on the occasion of the signing of the military agreement between Washington and Bogota, that the document concerned only operations within the territory of Columbia (with a view to fighting drugs trafficking and “terrorism”).

The document mentions “ world class space superiority”. On Page 217 of the document ** regarding the base at Palanquero it states clearly: “Mission or Major Functions: This Cooperative Security Location (CSL) enhances the U. S. Global Defense Posture (GDP) Strategy which directs development of a comprehensive and integrated presence and basing strategy aligned with the principles of developing relations with partner nations. Palanquero provides an opportunity for conducting full spectrum operations throughout South America including CN (Counter Narcotics) missions. It also supports mobility missions by providing access to the entire continent, except the Cape Horn region, if fuel is available, and over half of the continent if unrefueled”.

Full Spectrum Dominance is a US military concept involving joint military structure control over all battlespace elements in a region (land, air, sea, space). It is a strategic doctrine espoused by the USA in recent years with regard to preparing to control any situation with a wide range of military options.

Page 218 speaks about operations not in Columbia, but in the “sub-region” and I quote: “Location (CSL) at Palanquero best supports the COCOM's Theater Posture Strategy and demonstrates our commitment to this relationship. Development of this CSL provides a unique opportunity for full spectrum operations in a critical sub region of our hemisphere where security and stability is under constant threat from narcotics funded terrorist insurgencies, anti-US governments, endemic poverty and recurring natural disasters”.

The document goes on to mention “theatre operations”, “operational aircraft” and then justifies the location of Palanquero because of its location and the fact that it “minimizes the US military profile” and refers to “regional access and presence”.

“Palanquero is unquestionably the best site for investing in infrastructure development within Columbia. Its central location is within reach of Andean Ridge counter narco-terrorist operations areas; the superb runway and existing airfield facilities will reduce construction costs; its isolation maximizes Operational Security (OPSEC) and Force Protection and minimizes the U.S. military profile. The intent is to leverage existing

infrastructure to the maximum extent possible, improve the U.S. ability to respond rapidly to crisis, and assure regional access and presence at minimum cost”.

“Palanquero supports the mobility mission by providing access to the entire South American continent with the exception of the Cape Horn region if fuel is available, and over half of the continent unrefueled”.

In the same section we have a reference to the need to perform upgrades to Palanquero because “If these upgrades are not accomplished, it will severely limit the ability of USSOUTHCOM to support the U.S. Global Defense Posture (GDP)

Strategy which directs development of a comprehensive and integrated presence and basing strategy aligned with the principles of developing relationships with partner nations, ensuring mutual benefits between US and partner nations, limited restrictions on U.S. freedom of action by partner nations and appropriate sharing of costs”.

Is the State Department running the USA? It sure doesn’t seem to be President Obama.

*Federal Promotor from New York, living in Caracas since 2005.