The US administration tries to establish friendly relations with Latin American states. US Secretary of State Hillary Clinton will spend the whole week in Latin America. She will visit six countries of the region within the scope of her tour. 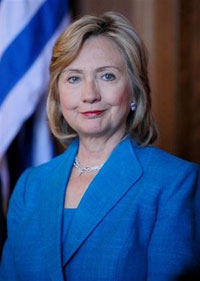 On March 1, Clinton arrived in Uruguay to take part in the inauguration of President Jose Mujica. It seems ironic that Mujica, 74, fought against pro-American appointees during the 1960s and the 1970s. Mujica is different today: in his public statements he promises to conduct moderate politics and even build friendly relations with Washington.

Afterwards, Hillary Clinton will travel to Argentina to meet the nation’s president President Christina Fernandez de Kirchner. Chile and Brazil are next on the list with Costa Rica and Guatemala following. Clinton will not have meetings with the leaders of Venezuela, Ecuador and Bolivia – the countries that stick to the anti-American course in their politics.

It is the first Latin American tour for Hillary Clinton as the US Secretary of State. US media say that the prime goal of the tour is to improve the image of the United States in the region.

It is worthy of note that the leaders of 32 countries of Latin America and the Caribbean area gathered for a summit on February 25 and agreed to build a new regional organization without the participation of the USA and Canada.

Boris Martynov, deputy director of the Institute for Latin America, said in an interview with Pravda.Ru that the USA tries to retrieve its influence in the region, which was lost during George Bush’s era.

“Latin America was pushed into the background when Bush was at power, although the region is extremely important for the United States. And here is the result: Latin American states have been very unfriendly towards the American course both in politics and economics,” the expert said.

The expert also said that Washington has not decided yet how to build relations in the region with those who share anti-American views. That is why, the expert believes, Clinton will not meet those politicians who follow Venezuela’s Chavez.

The US administration is particularly concerned about Brazil, whose leaders said that they would not dance to the tune of either Venezuela or the USA.

Brazil is currently a member of the UN Security Council, and the USA needs its vote to support Obama’s plans in toughening sanctions against Iran. It is not ruled out that Clinton will try to convince Brazilian President Lula to follow the United States.

The US administration should not pin great hopes on Brazil, though. Lula’s plans are different: he is going to visit Teheran and does not even try to conceal the fact that Brazil intends to improve relations with the Islamic Republic.

As for Chile, Clinton said that she was going to visit the country to conduct negotiations about assistance to the earthquake-stricken nation. Most likely, it is only a reason for Clinton to sound out Chile’s intentions of cooperation with the US administration. Chile has been under the leftist influence for quite a long time already.

Clinton ’s tour of Latin America is an important political event, of course. She takes a serious position in the US administration, but her position is not enough to achieve Washington’s goals in the region. Obama’s visit would be much more appropriate at this point.

“Latin American leaders realize that and do not attach much significance to Clinton’s trip. I would say that Washington has not chosen a very good way of reaching Latin America in an attempt to improve the nation’s image. Most likely, the trip is a preparation for Barack Obama’s visit in the near future,” Boris Martynov said.