Bin Laden is Bosnian and Karadzic is in the Dock?

With friends like Osama Bin Laden among the Bosnians, why should Radovan Karadzic need enemies? As the defence enters the last day of two, we see the utter injustice of the International Criminal Court, a NATO instrument of kidnapping, illegal detention and laundering of NATO war crimes. If it were a serious legal institution, Bush and his cronies would be languishing in a cell. As it is, it has again violated its own Constitution and the case is void. 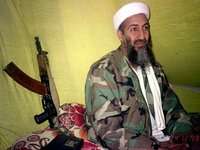 Bin Laden is Bosnian and Karadzic is in the Dock?

Radovan Karadzic, the Bosnian Serb leader during the Bosnian war, entered the first of his two-day defence today in front of the ICC at The Hague. Denying two counts of genocide and nine others (murder, extermination, persecution, forced deportation and seizing hostages), he declares that he will “defend that nation of ours” which followed a “just and holy cause”. After all, Radovan Karadzic was fighting international terrorism. And who was on the other side? The one the CIA referred to as UBL, himself: Osama Bin Laden.

Claiming that the Serbs were demonised for everything they did and promising to tell the “marble truth”, Dr. Karadzic, a psychiatrist, has been accused of orchestrating a campaign to ethnically cleanse areas of Bosnia-Herzegovina in a campaign which included the 44-month siege of Sarajevo and the so-called “massacre of Srebrenica” in July 1995 in which 8,000 Moslem males were killed.

But what is the other side to the coin? Dr. Karadzic claims to “have good evidence and proof” that the Serbs were only defending themselves against the Croatian and Moslem “ethnocentric aims” of Franjo Tudjman and Alija Izetbegovic to carve out their own States and that the 8.000 figure was an invention by his enemies including civilians and soldiers killed by the Moslems themselves.

Furthermore, several Dutch soldiers from the Netherlands battalion in Srebrenica have come forward, declaring they were hated in their own country, that there is complete repression against them and claiming that they did not see any Serbs committing any war crimes, that they had to defend themselves against the Moslems and not the Serbs, and further stating that the Serb soldiers were helping the Moslem women and children (as they had done in Kosovo, where women were fleeing the KLA prostitute rings and trying to reach the Serb lines).

The ICC was set up by the Rome Treaty. Under its own Article 55 on Rights of Persons during an Investigation, section 1 (d) it states that a person:

“(d) Shall not be subjected to arbitrary arrest or detention, and shall not be deprived of his or her liberty except on such grounds and in accordance with such procedures as are established in this Statute.”

Under Article 67 on Rights of the Accused, Section 1 (b), it states that a person has the right:

“(b) To have adequate time and facilities for the preparation of the defence and to communicate freely with counsel of the accused's choosing in confidence;”

Why then did Dr. Radovan Karadzic not have enough time to prepare himself, given that the prosecution submitted 415.000 pages to the trial since October? Who can read 2,766 pages a day and adequately prepare their defence? Given this, the case is void.

What was Dr. Karadzic fighting against?

For one, Osama Bin Laden is the proud holder of a Bosnian passport, according to an independent publication (Dani) which claimed that the Bosnian Embassy in Vienna “granted a passport to bin Laden in 1993” stating then that “High Moslem officials of the Bosnian Foreign Ministry agreed that (the destruction of these files) was of a high priority” and further that “the Bosnian government confirmed it had granted citizenship and passport to a Tunisian-born senior aide of bin Laden in 1997”.

What was bin Laden doing? Establishing an Albanian operation, setting up terrorist camps (in Bocina Donja near Maglaj in Bosnia), training Islamic fighters to carry out terrorist attacks on Serbs and funding the NLA in Macedonia, which controlled the drugs trade through the region. Moreover, Alija Izetbegovic failed to live up to his commitments under the Dayton Agreement (to remove all foreign Moslem fighters from Bosnia), for large numbers of foreign Mujaheddin remained in the area after the agreement.

And Dr. Radovan Karadzic is in the dock?