US Secretary of State Hillary Clinton stated in Washington February 23 that Russia and NATO should cooperate closer, and that the Russian administration needs to take part in the development of the new missile defense system, which NATO members currently build. 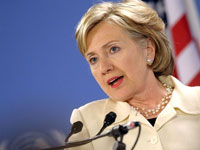 "While Russia faces challenges to its security, NATO is not among them,” Clinton said in Washington. "We want a cooperative NATO-Russia relationship that produces concrete results and draws NATO and Russia closer. Just as Russia is an important partner in efforts to prevent nuclear proliferation, so should it be in missile defense,” she said.

She also said that NATO and the Russian Federation must be more open to each other. However, she virtually rejected Russia’s ideas about the new European Security Treaty, albeit she pointed out several of Russia’s suggestions about the treaty.

“The Russian government has put forth proposals for new security treaties for Europe,” Clinton said. “However, we believe that these common goals are best pursued in the context of existing institutions, such as the OSCE and the NATO-Russia Council, rather than by negotiating new treaties, as Russia has suggested,” she said.

We have to say that it has been a while since a high-ranking US state official delivered such an abstract speech about the relations between Russia and NATO. Clinton was highly diplomatic in her speech – she has not made any attacks against Russia. Yet, she made it clear that the United States was not going to revise the existent system of the European security.

“Mrs. Clinton’s speech does not contain the answers to the questions, which Moscow repeatedly put to American and NATO partners,” Russia’s Ambassador to NATO Dmitry Rogozin said February 23.

Russia remains concerned about the situation, which has been formed during the recent 20 years, when NATO’s defense machine was moving closer and closer to Russia’s borders. However, the USA simply ignored Russia’s concerns at this point.

“This is a one-legged world. One can characterize NATO’s spontaneous eastward expansion as a belch of the Cold War. We can not be satisfied with these rules. Russia does not need cosmetic repairs of an organizations of the European-Atlantic partnership, particularly the OSCE. What we need is equitable, stable and eternal peace in Europe,” Rogozin said.

As for Russia’s participation in the creation of the missile defense system in cooperation with NATO, Rogozin urged the Americans to be more specific in their suggestions.

Cooperation in the field of missile defense system is based on several stages, the Russian official believes. First and foremost, there should be a precise definition to missile threats. Secondly and thirdly – partners should put pressure on potential aggressor, as it currently happens with Iran and North Korea. Afterwards, it will be time to speak about the creation of the joint missile defense system. Rogozin also said that the USA went behind Russia’s back to discuss opportunities for deployment of its objects near the Russian borders.

“NATO-style partnership in the field of missile defense is about the following: member-countries are supposed to provide their possibilities, their territories, first and foremost, for the deployment of US missile systems. Russia can hardly be optimistic about this style of cooperation. That is why we urge our American partners to prove that Washington is ready for real cooperation,” Rogozin said.

Russia is waiting for new specific suggestions from the USA which would take account of Russia’s concerns. However, the USA does not want to sign the new European Security Treaty, nor does it exclude a possibility for Georgia and Ukraine to join the alliance.

Russia has many questions to Hillary Clinton. Her invitation does not seem to be timely at all.

Russia Today: NATO can't be there to solve every European problem - ex-NATO chief