The Future of Russian Energy Projects in Bulgaria is in Limbo

The future of Russian energy projects in Bulgaria is in limbo. The head of Russian Ministry of Foreign Affairs Sergey Lavrov made a statement on January 22 saying that Russia and Greece would like to know whether Sofia was interested in the construction of the Burgas-Alexandroupolis oil pipeline. “As of now we have not received a definitive answer,” he said. 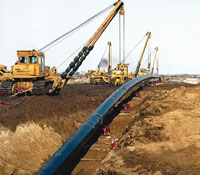 The Future of Russian Energy Projects in Bulgaria is in Limbo

The idea of this Trans-Balkan structure was masterminded back in 2007. For the implementation of the project, the parties registered Trans-Balkan Pipeline B. V. company on February 6, 2008. Russia has 51% of shares in the project, and the rest is divided between Bulgaria and Greece in equal proportions.

The oil pipeline is to lessen the burden on the Black sea narrows, used to supply oil from Russia to the Bulgarian port Burgas via tankers. European countries receive this oil through the Greek port of Alexandroupolis. The implementation of the new project will make oil significantly cheaper.

Yet, there are unexpected obstacles from the Bulgarian party. There are also obstacles related to another joint energy project, construction of a nuclear station in Belene.

Bulgaria failed to provide a clear explanation as to why it had suspended the agreements signed back in 2007. Bulgaria’s formal answer regarding the nuclear station project is that one of the largest European electric power producers, RWE, withdrew from the deal. RWE, whose share in the project was 49%, was to invest a large sum of money into the deal. Now Bulgaria has to look for new investors.

However, the solution for this problem seems to be an easy one. Russia has stated earlier that it was ready to be not only a contractor but also an investor for the Belene project.

In case with the oil pipeline project, Bulgarian partners suddenly (after the election and forming of the new government) got second thoughts about its efficiency and profitability.

According to the agreements reached in September of 2009, by November 1 Sofia should have made a final decision and made a definitive record regarding the future of these two projects. It has not happened yet.

It seems that the reasons for the suspension are of political nature. It looks like Bulgaria’s new government cannot decide whether it needs joint energy programs with Russia. They have already expressed their concerns about potential environmental hazards.

According to the Bulgarian Premier Boyko Borissov, the oil pipe will not be built without “a thousand percent” guarantee of ecological safety. He reminded that Burgas and other Bulgarian cities had rallies of protest against the construction of the Russian “pipe.” Besides, these cities held referendums whose participants voted against implementation of the project. Although these plebiscites do not have binding force for the officials, this is the argument they cite.

The construction works were planned for 2008, and were to be completed in 2010.

Ivan Rodionov, a professor in the Higher School of Economics, believes that Bulgaria will not give up its joint projects with Russia. “This is their way of getting a more acceptable deal,” he told to Pravda.ru. “There are countries that have nothing to sell except for their territory. The Bulgarian officials are trying to do just that. They want serious preferences in this project. We do not know the specifics yet. I am sure we will find out later. Bulgaria is buying the time and talking up the price knowing that the country is an integral part of the project. Their concerns regarding environmental issues are a sure sign of their attempt to get a preferential treatment.”

Alexander Safonov, an expert and an employee of the Moscow State University, has a similar opinion. “The situation with the suspended energy projects in Bulgaria has to do with the new government that wants to receive additional advantages. Bulgaria will buy time as long as it can to get maximum benefits. Unlike Greece, Bulgaria was less affected with the financial crisis. The issue may remain unsolved until this summer.”

Prime Minister of Greece George Papandreou stated on February 16, during his official visit to Russia, that a feasibility study and environmental impact statement as well as a transit agreement could be reached within the next six months. He added that construction works could be commenced immediately after that.

His optimism could be explained by a certain progress with regard to the technical project of Atomic Power station Belene, offered by Russian Atomstryexport. The project has been approved by Bulgarian NEK (National Energy Company). The next step is getting a permission of Bulgaria’s nuclear control agency. The process may indeed be under way.

Russia Today: Bulgaria takes a step back on South Stream