In the United States of America, it has recently been concluded in a top-level report that lawyers who wrote covering memos authorizing torture did not violate legal ethics, an outrage which has prompted Human Rights Watch to call for a full inquiry into the abuse of detainees. The question also arises as to why the original charge of “professional misconduct” referred in the draft version of the Report was changed to “poor judgement”. 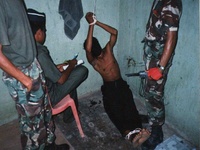 Two words typed into an internet search engine will immediately lead the researcher to the British site Iraq Inquiry, an in-depth study of the behaviour of the British Government in Iraq to deem whether the United Kingdom acted illegally in going to war outside a UN mandate, a process in which Prime Ministers and Government Officials past and present are subjected to the same grilling as “ordinary citizens”.

Would such an inquiry be possible in the United States of America? Hell, no! And after the results of the US Justice Department Report on the behaviour of lawyers working for the Bush Administration, this hardly comes as a surprise.

“Poor judgement” is the consideration of the Report, carried out by the Justice Department’s office of Professional Responsibility, regarding the issuing of memos authorizing torture, but not a violation of legal ethics rules. So we may then infer that if in the United States of America it is “poor judgement” and nothing more to perpetrate an act of torture, what about terrorism? Were the culprits of 9/11 using “poor judgement” as well?

Yet there is something more sinister. “Poor judgement” was the term referred to in the final version of the report, revised by a David Margolis, from the Office of Professional Responsibility, who reviewed it and who overruled the adoption of the expression “professional misconduct” contained in an earlier version.

Nevertheless despite this apparent attempt to water down the Report, Andrea Prasow, senior counter-terrorism counsel at Human Rights Watch, considers that “Despite failing to find the former Justice Department lawyers responsible for misconduct, the Justice Department report nevertheless provides strong evidence indicating that the authors of these legal opinions should be investigated for their role in facilitating torture”.

In short, if the United States of America and its President are serious about Change, and he should remember that he was elected on this ticket, then Change has to mean the execution and implementation of policy from the US Administration in a way which is transparent, above suspicion and wholly not only within the letter of the law, but also every code of ethics.

When senior lawyers issue opinions which are carefully drafted not to uphold the law but rather to facilitate torture, then surely if something is not deemed to be wrong, then we can only conclude that the United States of America has not changed one iota and probably never will, in the near future at least.

Where is the Change, President Obama?