In the recent years, Brazil has been playing a significant role in world politics. Brazilian delegation is a regular guest at the G8 meetings and it is impossible to imagine the G20 without it. This country is often called the leader of the region in Latin America. Brazil owes its many achievements to its President, Luiz Inácio Lula da Silva. 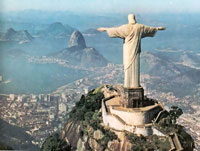 Luiz Inácio da Silva was born in 1945 in a poor family. Lula is the nickname invented by his mom. Brazil has a trend of giving people official nicknames. For example, famous soccer players Pele and Zico became famous under their nicknames. Yet, it is unheard of a politician to have a nickname, and the Brazilian leader will make it into history as a “president with the official nickname.”

Lula could not read or write until he was ten. Later he filled this gap in his education. When he was 14, the family moved to the largest city in the country, San Paolo. Lula got a job at a factory where he lost his little finger in an accident.

His only chance to build a career was in the union. In the 1970s, Lula showed himself as a charismatic speaker, a democracy fighter against the dictatorship. In the 1980, he founded the Partido dos Trabalhadores (PT) or Workers' Party. The party united people of various political believes, from Trotskyists to left Christians. The future President had to employ his diplomacy talent to save the Party from the breakup.

In 1985 Brazilian dictator г ship collapsed, and Lula’s career took off. A year later he became a member of the Parliament, and in 1989 he ran for President campaigning on walking away from the multibillion foreign debt and taking lands away from the wealthy. He lost the election and the next two, in 1994 and 1998.

Yet, he did not give up. By 2002 he dropped his radical slogans like “take away and divide.” He invited business people to his team, and the poor supported him, too. He campaigned on the foreign policy independent of the US, but without radical anti-Americanism. This moderation has helped him win the election twice, in 2002 and 2006.

During Lula’s presidency Brazil has been successfully developing, and has made it to the top ten of the leading world economies in terms of GDP. The profits were redistributed in favor of the poor, but foreign companies were allowed to keep their possessions. The heavy industry sector has grown, and large amounts of money were invested into science. Brazilians were buying not only military equipment, but its production technology as well. The country had no social riots shaking South America in the past ten years.

Lula has an active foreign policy. He made nearly 200 foreign visits which earned his plane a nickname Aero-Lula. He proved himself as a talented diplomat, managing to preserve amicable relations with the leaders of Cuba and Venezuela and conduct a good dialogue with the USA. Lula participates in every significant world forum including G8 and G20.

The Brazilian President has done a great deal to make South America a pole of the multipolar world rather that the “soft underbelly of the USA.” In 2004 Lula was at ground zero of forming The Union of South American Nations (UNASUR), designed as an analogue of the European Union. He was a passionate supporter of the idea of the introduction of the common currency in the region and reduction of the US dollar dependency. In 2008–2009 Brazil began transactions with neighboring Uruguay and Argentina in national currency instead of the US dollar.

Lula secured his status of the main peacemaker on the continent. At the turn of 2007-2008 he managed to settle a large military conflict that was about to rise between pro-American Columbia and anti-American Venezuela and Ecuador. At the time, Columbian troops intruded Ecuador to suppress FARC insurgents’ bases, and Hugo Chavez threatened Columbia with military intervention.

In the fall of 2008, the Brazilian President supported his Bolivian colleague Evo Morales who tried to remove pro-American right-wing officials from power by organizing street rallies. In 2009 Brazil played an important role in helping to overcome the crisis of power in Honduras, whose dethroned president Manuel Zelaya found shelter in the Brazilian embassy.

One of Lula’s main creations is the South American Defense Council (SADC) founded under the UNASUR in December of 2008. This organization is designed to solve issues arising in the region without participation of third parties, and mostly, the US. In 2009 the Brazilian President spoke against locating seven American military bases in Columbia. At the same time, he refrained himself from critiquing Washington and managed to preserve amicable relation with the Americans.

In his attempts to strengthen the multipolar world, Lula wanted to build closer relations with Russia, China, and India. Under his presidency, Brazil was an active member of BRIC. Russian presidents visited Brazil twice (Vladimir Putin in 2004 and Dmitry Medvedev in 2008). Both countries have signed dozens of agreements about collaboration in many areas, including high-technology. Lula has signed similar agreements with China and India.

Speaking for the development of the multipolar world, he stresses that the UN should play an important role in the struggle with the mostsignificant challenges to the world stability. He is struggling for Brazil to receive a status of a permanent member of the UN Security Council. He is speaking against the attempts to overturn the existing international law. In particular, Brazil refused to recognize the independence of Kosovo.

Another evidence of Lula’s authority is two sports victories that happened during his presidency, namely, 2014 World Cup that will be held in Brazil, and Summer Olympics that will be held in Rio de Janeiro in 2016. In both cases, Brazilian applications were submitted by the President. In case with the Olympics, he won the sports and red-tape fight with Obama who was campaigning for Chicago.

Thanks to the efforts of its leader, Brazil is now one of the most important players in the world politics. Lula did not have to resort to aggressive statements to achieve this status. Unlike Chavez, he has not been sharply critical against the US. Yet, he was able to conduct his policy completely independent of Washington and deserve respect all over the world. He did it despite the lack of good education and the fact that he goes by his nickname.