The wars in Afghanistan and Iraq are following different trends, as shown in the chart that illustrates this text. George Bush, who initiated the two, had a strong preference for Iraq. It went all wrong. He completed his term of office, leaving both in a water bath, except in speeches. Barack Obama says he will leave Iraq in the next year, but has radicalized in Afghanistan. Neither will that work out, as is already beginning to show with the ostentatious Operation Moshtarak. 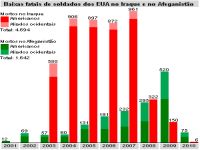 The graph at shows the death toll of American soldiers and Western allies (mostly British). The numbers are shown at www.icasualties.org, one of many sites that come with these killings online, sometimes even with the name and rank of the dead.

Even more precarious is the low coverage of the mercenaries 'security firms' - that make a good business in these wars semiterceirizadas - or the lower opposite side. And even worse for the civilian casualties, Iraqis or Afghans.

The numbers in Iraq

But the numbers in the graph show the essentials: the war in Iraq, even starting later (March 2003) was the most deadlier and growing ... until 2007. May of that year is the worst month for the occupants, with 131 dead. After that, there is a sudden fall.

Bush pretended that it was because he was winning. The prime minister of Iraq's Shi'ite Jawad al-Maliki (Dawa party, linked to neighboring Iran and once considered by Washington as a terrorist organization) pretends to head a puppet government. The different wings of the resistance to occupiers that pretends interest ... And all wait for next year, when, according to the promise of Obama and a resolution of the Iraqi government, foreign troops will eventually leave.

The numbers in Afghanistan

Notice now the U.S. casualties in Afghanistan. They never peaked like that of Iraq (they also contain a higher percentage of dead non-Americans), but go on a steady climb. In 2008 they are tied with Iraq. In 2009, they beat a ratio of 3.5 for one. And early this year they are ten times more numerous.

Obama and his generals insist on sending more troops (30 thousand U.S., plus 7 thousand allies) and operations like Moshtarak, the highest since the 2001 invasion, with 15 thousand soldiers deployed. In this way the Iraq war can still pale in the face of Afghanistan.

Thus, the young senator who began his walk to the White House strongly opposed to the Iraq War, and was elected with a vote of 99% of U.S. peace activists, may end his days as the biggest war president. Like his fellow Democrats John Kennedy and Lyndon B. Johnson, who made the escalation of the Vietnam War in the 60s.

There is hardly a military solution available to the U.S., whether in Iraq or Afghanistan. This is because "war is the continuation of politics by other means", as taught by the Prussian Carl von Clausewitz (1780-1831), general and sagacious military theorist.

Who wins the war also wins the politics. And here come the dead both in uniform and civilians - like the 12 who lost their lives in Marja on Sunday when their house was hit by an American missile due to a 'mistake' of 300 meters.

The U.S. won the 2nd World War, and entered triumphant in Paris in 1944, under the applause of the French, because they represented the Allies who had defeated fascism, politically and militarily.

As they entered with their troops in 2003, Bush staged a parody of liberation that seemed more out of a comic opera. He had enough brute force to keep the country busy, but never to bend it to his projects.

Afghanistan will be even more difficult, given the inhospitable geography, the military tradition and the neighborhood with Pakistan, where there also is fervent opposition to the invaders. The green bars in the graph that illustrate that this matter will tend to grow. And with them also the opposition to the slaughter in Afghanistan within the U.S., sounding again and even stronger, the more centennial slogan "War on War", revolutionary and fair.