Germany has found itself involved in a scandal similar to the one which took place in Switzerland in the fall of 2009. The population of Germany’s Saar province decides whether or not the Muslim community of the province can build a minaret near the mosque in the town of Volklingen. It is not ruled out that the question will be solved at a referendum since opinions are different. 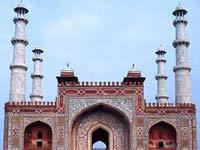 The story started in January when the Muslim community of the town addressed to the municipal administration with a request to build a minaret near the mosque. The story bore a striking resemblance to what happened in Switzerland last year.

Switzerland ’s ultra-right People’s Party stated that minaret was a symbol of Islamisation of the country. The construction of minarets in the European nation was banned as a result of the referendum.

Let’s get back to Germany. The town of Volklingen with its 40,000-strong population is a special place on the map of the country. Muslims, presumably the Turks, make a third of the town’s population. The mosque was built there a long time ago, but it raises concerns with many people.

Rightist organizations of Germany share the views of Switzerland’s ultra-right activists, who believe that minaret symbolizes the Muslim aspiration to power.

Spokespeople for leftist political organizations claim that a prohibition will trigger massive protests. A local priest said that minaret was not a symbol of opposition between two cultures. Quite on the contrary, it represented peaceful integration of Muslims into the German society, the priest said.

An opinion poll conducted among the local population showed that the adversaries of minarets outnumber their supporters. Thus, it is not ruled out that a small town in Germany’s Saar will become the first place on the map of the European Union where the construction of such religious objects is officially prohibited (Switzerland is not a member of the European Union).

The story in Saar may echo in other regions of Germany. The Muslim population of Germany makes up over 4 million people; Turks make two-thirds of the number. Arabs, Kurds, Muslim Bosnians and Albanians have large communities in the country. Nearly all of them have adjusted themselves to the German society. At least a quarter of them said that they did not attend mosques. Hundreds of thousands continue to follow Shariah laws , though .

The minaret scandal took place nearly two years ago in Germany’s Cologne, the hometown to the nation’s largest and most renowned Christian temple. The city administration gave its permission for the construction of a 55-meter tall minaret. The decision resulted in the establishment of a public association, which organized massive actions of protest in the fall of 2008. The government was forced to reconsider its previous decision: no minarets were allowed to be taller than the domes of the Cologne Cathedral.

The number of Muslim buildings in Germany has been growing steadily. There were only three mosques in the FRG in 1970. Nowadays, the number of mosques and prayer halls makes up nearly 2,500. Kreutzberg, a district of Berlin, is known as “Little Istanbul” because it looks like an Oriental city. Other large cities, such as Hamburg, Munich, Cologne and Frankfurt-am-Main have a similar situation.

There are several dozens of Muslims organizations in Germany. Most of them are loyal with the nation’s authorities. There are radical Muslims too, of course, but the German police persistently claim that the majority of immigrants from Muslim states are law-abiding citizens. Indeed, many Turks own cafe shops and little grocery stores. The Turkish language can very often be heard on constructions spots in Germany. Turkish women, just like Bosnian Muslims and Albanian females, do not wear any head scarves – they live, study and work like German women.

Nevertheless, Germany is concerned about the propagation of Islam in the country.

In 2003, the Constitution Court of Germany allowed the laws to prohibit the wearing of hijab scarves in public places. As a result, female students were not allowed to display any religious symbols at schools.

The decision sparked protests in many German provinces. Muslim organizations filed countless lawsuits. Several German politicians called upon the national prohibition of hijab. Leila Akgun, a social democrat of Turkish origin, once said that hijab was “the prison that threatened human rights.”

The minaret scandal and the hijab dispute in Germany showed that the nation faced the problem of developing future relations between native Germans and natives of Muslim states. Any abrupt move can trigger major inter-cultural problems.