Venezuela is suffering from a serious crisis in the energy industry. The crisis made the nation’s President Hugo Chavez refuse from the scheduled participation in the summit of the Union of South American Nations, which currently takes place in Ecuador to help the survivors of Haiti earthquake. 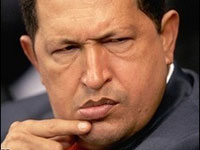 Chavez now has a much bigger problem. In his new “Suddenly Chavez” radio show, which debuted on February 8, the president of the Latin American nation stated that he declared a state of energy emergency due to a draught. The state of emergency will stay in effect for 60 days, but it can be prolonged afterwards.

Venezuelan President believes that it will be most efficient to punish those who do not save electric power. The natural persons, who overuse electricity, will have to pay twice as much for the consumption of electric power.

Enterprises will have to have a 20-percent reduction in the consumption of electricity, or they will be shut down. To crown it all, Venezuelan newspapers will be publishing shameful lists of those people who cause damage to the revolutionary economy of the nation.

There are not only sticks - carrots come too. The people, who save electricity and consume it in smaller volumes, will pay 1.5 times less.

The rules may seem to be nice and fair for such a leader as Chavez, but the problem is different, though. Venezuela has enormous energy resources, but still the nation suffers from the energy crisis. Chavez blames American imperialists and natural disasters.

There is as grain of truth to it. There were hardly any rains in Venezuela in 2009. The water level at the nation’s major hydroelectric power plant went ten meters down. The production of electricity reduced considerably too.

The government was forced to restrict electric supplies at retail entertainment centers and industrial enterprises. There were special restrictions introduced for the latter: 2 megawatts for small and five megawatts for large enterprises. Venezuelan authorities also started practicing fan power outages across the nation, except for Caracas.

The energy crisis has affected all other spheres of life in the country. In January, Chavez devalued the national currency, which resulted in a national panic and price growth. In the meantime, cards for essential goods have already appeared in the country, which does not add more popularity to Chavez.

Hugo Chavez currently enjoys the support of about 38 percent of the nation’s population. Social tension continues to grow. Students, whom Chavez calls “fascists”, organize actions of protest on a regular basis. Several people have already been killed in violent clashes with police.

Chavez’s regime falls apart at the seams. Many of his former associates have become his opponents. Venezuela’s former ministers for foreign affairs and defense said that Chavez had neither moral nor material right to rule the nation. Poverty continues to grow, there is absolute chaos in the social field. Venezuela has one of the largest oil reserves in the world, but it has found itself in a very complicated economic situation. The former ministers said that the presidential team is concerned about their personal ell-being only.

Chavez can only blame the USA. He said that the USA and its allies, particularly Canada, try to attack Venezuela and sow violence in the country.

His statements were made after US ambassador to Brazil criticized the Venezuelan administration for repressing its own nation, shutting down opposition channels, the growing level of street crimes and power outages.

It is worthy of note that Caracas is one of the world’s most criminal cities.

Viktor Semyonov, an expert for Latin America said in an interview with Pravda.Ru that nature obviously plays its role in the economy of the nation.

“Chavez is the main reason, though. He has been at power for ten years. He received enormous profits from selling raw materials, but he never built an electric power plant. He spent all that money to support his numerous allies and the nation’s needs were forgotten,” the expert said.

Now Chavez announced that he was going to invest a billion dollars in the development of thermal stations. This amount will not be able to compensate the minimum needs of the country. Eighteen billion would be enough, but it seems that Chavez does not have such an amount. In addition, the nation’s foreign debt has grown 2.5 times during Chavez’s presidency and now makes up $50 billion.