Afghanistan: Mother of All Battles Poised to Begin

As NATO gets ready for a massive troop surge in Helmand Province, the local population flees ahead of what both sides promise to be the Mother of All Firefights. The Taleban have sneered at NATO’s warning to move away or lay down arms in this important bastion, the center of the drugs trade which finances their operations and promise a bloodbath. But is it really necessary? 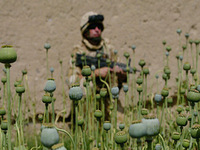 Afghanistan: Mother of All Battles Poised to Begin

Operation Moshtarak (“Together”, in Dari) is about to be unleashed by NATO in the southern Helmand town of Marjah, the largest population center under Taliban control in the region and the largest counter-insurgency operation since the Afghanistan campaign began in 2001. 15,000 NATO and Afghan troops, plus special forces are poised to attack a force of around 1,000 Taliban fighters, who have been warned to lay down their arms or leave the area. But they refuse.

The result is a mass exodus of tens of thousands of civilians who fear being caught up in what promises to be a bitter fight.

The impending engagement constitutes a critical moment in the operation in Afghanistan, where the Taliban gains increasing momentum and where increased engagement on the battlefield means more civilian casualties – and the ensuing loss of public opinion. Therefore, is a massive engagement really the answer?

NATO has been in Afghanistan since 2001, a war whose cost is estimated at around 252.5 billion USD to date. Frustrated by the Taliban gaining control on a sustainable basis in increasing areas of the country, NATO commanders asked for more troops. The first surge of 21,000 arrived last March.

Since then, engagements have escalated rather than decreased and casualties have reached record proportions. Meanwhile, the Taliban have managed to secure a foothold in every region where the majority of the population are Pashtuns and have expanded from the south and east of Afghanistan into the center and north of the country, despite the fact that combat operations by NATO increased by 55 per cent, air strikes by 39 percent and the number of bombs dropped per month by 460 per cent since the surge began.

In 2009, the Taliban killed twice the number of NATO troops that were killed in 2008. So are massive military operations the answer?

No, for a number of reasons. Firstly, the Taliban have learned how to engage NATO and avoid confrontations in which they are heavily outgunned, preferring to retreat fighting and inflicting as many casualties as possible on what is seen as an invading foreign force of occupation.

Secondly, civilian casualties do nothing to gain the hearts and minds of the local population. On the contrary, civilian casualties provide more fuel for the Taliban, whose opium-dollars provide in many areas the only alternative to abject and endemic poverty. 60 per cent of Afghanistan’s population of 27 million live below the poverty line, on less than 1 USD per day. Per capita income is 420 USD, the literacy rate is lower than 25 per cent, life expectancy is 43 years of age, 13 per cent have access to potable water.

Thirdly, as soldiers, the Taliban have learned to undo at night what NATO does during the day, when they are passive farmers.

Fourthly, as NATO casualties rise, so does the war-weariness of the populations in the countries that have to foot the bill. And for what? Studies on morale in the US military forces reported a drop of “very high morale” to just 5.7 per cent in 2009, while public opinion has dropped to 39 per cent in support of the war. The scenario is not much better in Britain.

Fifthly, where and what is the exit strategy? How can the NATO forces extricate themselves when on one hand they are trying to build a strong centralised Afghan Armed Force while at the same time equip and pay off war lords and tribal militias?

The answer to all these questions is simple: there is no exit strategy. Great care has been taken to guarantee that there are enough insurgents alive, armed and fighting in Afghanistan to ensure that the fight continues for many years to come. But sustainably. Afghanistan is after all the country whose Taliban government received an offer of billions of dollars back in 1998 from the USA to build a pipeline to channel Central Asian energy resources through to the “big ally” Pakistan.

One look at the US military bases in the area, virtually encircling the Islamic Republic of Iran, while providing a useful foothold on the border of a growing PR China and a Pakistan which threatens to spiral down into chaos completes the strategic picture.

So what will be the outcome of Operation Moshtarak? More casualties, more violence and more of the same.