Adolf Hitler's Rise to Power 77 Years Ago Shrouded in Mystery

January 30 of 2010 marked the 77th anniversary of Adolf Hitler's rise to power in Germany. On that day, the Nazi leader was sworn in as Chancellor of the Weimar Republic. The number 77 is mystical, and the Nazis were known for their love for mysticism. Further we will explore some Nazi-related myths. 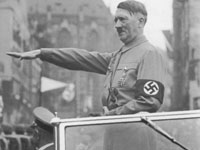 Adolf Hitler's Rise to Power 77 Years Ago Shrouded in Mystery

One of the contemporary myths suggests that Hitler came to power lawfully and democratically. Obviously, this myth is used as a horror story prior to virtually any election. In reality, this statement is false. This historic experience only attests to riskiness of elections in terms of formal democracy coupled with unfair practices of the election campaigns.

Adolf Hitler and his party seized the power employing complex, formally democratic procedures and dirty election techniques. They utilized non-constitutional “emergency” lawmaking, administrative annihilation of the country’s federal system, and, most importantly, games and intrigues in the executive offices.

Election campaign conducted by National Socialist German Workers Party (NSDAP) could not serve as an example of lawful and honest politics. First, the campaign was based on demagogy and populism, leaving the people unaware of the real purposes and methods of the Nazis. Anti-capitalist and socialist slogans were widely used.

The party who proclaimed itself as “socialist” and “workers” had no intentions of justifying these attributes in practice. On the contrary, it created blocks with the most conservative parties of Germany who represented the interests of the big money.

Hermann Goering once wrote a letter to a German manufacturer saying that the latter should not be confused with the texts of the party’s posters. He stated that the ends justified the means, and that every party enticed the voters with slogans. This example clearly shows the intentional deception of the voters.

Second, the Nazis used dirty intimidation and “false choice” techniques. The voters were mobilized with a threat of communist power. Twice deceived voters gave their votes to the NSDAP. They believed they were choosing patriotic socialism (and not the Nazism) over the Communist Party of Germany (KPD).

Third, besides election techniques and lies, the Nazis used direct pressure and terror by removing from political struggle and physically eliminating their competitors. They also employed provocations, including arson attack on the Reichstag building in Berlin on 27 February 1933, a month after Hitler was appointed Reichschancellor.

Yet, despite all tricks and ploys, constitutional struggle of Nazis for power was not always successful. Contrary to general opinion, the Nazis never received the absolute majority in the German Parliament lawfully and democratically.

During the election of 1930, the NSDAP took second place with 18.3% votes; the German Social Democratic Party obtained 24.5 %; communists secured 13.1%. In 1932, Hitler lost Reichspresident election to Field Marshall Paul von Hindenburg. In 1932, national socialists received the majority in Parliament with 37.4% votes, but communists improved their results as well. The same year, the Reichstag was dismissed, and new election was held. In this election the Nazis received fewer votes, 33.1%. On January 30, 1933, President Hindenburg appointed Hitler the head of the government.

Hitler was appointed because of the pressure of the elite and oligarch circles including petitions of German professors and manufacturers for Hitler to be appointed. Hitler also was helped by personal influence of Goering who was friends with Hindenburg’s son and intrigues in the conservative executive offices, who were hoping to form “balance of power.”They wanted to place Hitler as the head of the government as a political puppet who would cover their actions. This means that Hitler was appointed via bureaucratic operations rather than people’s will.

On February 1, the Reichstag was dismissed again by President Hindenburg. On February 4, the President signed a decree about “Protection of the German people” (Verordnung zum Schutze des Deutschen Volkes), limiting people’s freedoms. Two more emergency decrees were issued after the Reichstag arson. They included the decree allowing for the protection of the people and the state and the decree against betrayal of the German people (Verordnung gegen Verrat am Deutschen Volke und hochverraeterische Umtriebe). These decrees made it lawful to pursue political opponents. Yet, the next election held on March 5, 1933, did not bring the party the absolute majority in the Parliament.

The “democracy” stops here. On March, communists’ mandates were made void and null by an unlawful administrative order. The deputies themselves were either killed or arrested and sent to Dachau concentration camp. On March 21, known as "Day of Potsdam," a constituent conference of the new Reichstag, closed even for social democrats, was held in a Potsdam church. On June 22 of the same year, The German Social Democratic Party was banned. The “ Law against the Establishment of Parties” was issued on July 14, 1933 (Gesetz gegen die Neubilding von Parteien). All parties except the NSDAP were dismissed, and membership or organization of a new party was announced a crime.

On November 12, 1933, a new election was held which was naturally won by the NSDAP. Neither this election nor the referendum held on August 19, 1934, regarding Hitler combining the roles of Reichspresident and Reichschancellor, were democratic. Plebiscite was purely functional and was meant to confirm the title of Fuehrer that Hitler received on August 2, after the death of the President.

On the day of the referendum, the army was brought to Hitler for an oath of allegiance, which clearly shows that the votes did not decide anything. The results were also guaranteed because people lived in fear and terror, all autonomous rights of lands and municipalities were abolished, and the administration was fully controlled. Concentration camps and political jails were busy working, any opposition was demolished, and free speech and meetings were banned.

The German Parliament gradually lost its power when Hitler came to office, and since 1940 it stopped to assemble.

The history of the political shady undertakings by the Nazi shows how dangerous voters and public opinion manipulation can be. Distortion of the essence of the people power can be easily transformed into its converse, murderous tyranny.