International Terrorism: How Dangerous, How Real? 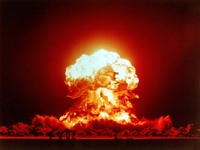 International Terrorism: How Dangerous, How Real?

What is the difference between a terrorist and a common murderer? The first has a cause and claims to fight for an ideal, and murders. The second murders. The first murders indiscriminately, not caring whether his/her victims are men, women or children. The second is more likely to target fellow criminals, people associated with him/herself, and most likely, adult males.

Therefore we see that there is nothing heroic about the terrorist, for the terrorist fights from under cover, perpetrates his attacks against the defenceless, against innocent members of society and only makes his presence known moments before it is too late to do anything about it. Nothing brave, nothing courageous, nothing mystical, nothing manly.

In a sense, to have a cause, a terrorist organization must necessarily have a broad base of support among a sector of society, be this within a state or at a supra-national level. In the 1970s and 1980s, the IRA enjoyed support and financing not only within Ulster and to a certain extent in the Republic of Ireland, but fundamentally from the Irish diaspora in the USA, where well-wishing NORAID contributors in New York in fact were funding terrorist attacks.

The same attacks were to go full swing and hit New York in the face on 9/11. While there was a certain amount of covert collusion among the Celtic terrorist movements, the IRA in Northern Ireland/UK and the Armee Revolutionnaire Bretonne (ARB), in Brittany, France, there was far more collaboration between ARB and the Basque separatists, ETA, in the 1980s and 1990s and during these decades, in Europe, International Terrorism was reduced to supplies of semtex explosives and financing operations.

The real international terrorism however was being fostered by those who supported Islamic extremist movements in Central Asia creating movements hostile to the Soviet Union. To make the break from simply Islamic (following Islam) to Islamist (radical Islam), these movements needed – and found – a common focal point in Wahhabism, a movement based around a stricter following of the Qu’ran, as professed by Muhammad ibn Abd al-Wahhab (1703-1792), and which identified as ‘takfir’ those whose behavior was considered anti-(Orthodox) Islamic.

What had been largely a Saudi religious, social and cultural phenomenon, gained roots elsewhere in the Middle East and Central Asia, including Russia’s southern flank (Chechen Wahhabis and the Mujaheddin movement, launched from the Madrassah of Pakistan with the CIA’s total and wholesome support).

To claim that the United States of America created a monster by meddling in complex issues entirely beyond the grasp of those who dictated the country’s external politics (traditionally business lobbies not known for their cultural interests and more famous for chortling clubbishly while peppering each other’s buttocks with buckshot) would be an understatement. Washington created the Mujaheddin, Washington used bin Laden, directly or not. Yet to claim Washington knowingly created the Taliban and Al Qaeda is an overstatement as unfair as it is untrue. The monster was created when the Mujahedin Jihad leadership (Maktab al-Khadamat) morphed into Al Qaeda. By then the master had lost control.

From Wahhabism to Al Qaeda

If Wahhabism was to Islam what the Presbyterian or Quaker movements were to Christianity (and one must take into account the socio-cultural-historical comparative vectors followed by both religions over the time of their evolution), then bin Laden, and Al Qaeda, if not the Taliban themselves, have committed the same psychopathic blasphemous mistakes as countless Christian heretics have done. For Usama bin Mohammed bin Awad bin Laden and Al Qaeda (the Islamists), the takfir is now the enemy, the infidel, the non-follower of the word…dictated by the Islamists.

Yet it was precisely in the CIA/bin Laden Afghanistan Jihadlaunched against the Soviet Union, where the roots of Islamist International Terrorism lie, for bin Laden, Ayman al- Zawahiri and Mullah Omar were the focal point around which Islamic zealots from Chechnya, from Uzbekhistan, from Indonesia, Pakistan, Saudi Arabia and elsewhere gathered, first to form the Mujahedin. After a period of in-fighting among various factions, the Pashtun-based Taliban movement appeared dominant and this was the eventual winner emerging from the struggle, which bin Laden latched his Al-Qaeda onto. Or rather, the leaders of the Jihad became Al Qaeda (1988-1990) and the Taliban became their foot soldiers…without necessarily being one and the same thing at the beginning and over the past decade, far from it, with the Taliban and Afghan warlords having their hands firmly on the revenue from opium production and these days sectors of the Taliban movement being poised to return to Government. The divorce between the Taliban and Al Qaeda appears to be more or less complete and final.

How dangerous, how real?

The debate rages on about how true it is that a chain of command and control can be linked directly from New York/Washington to the mountains of Afghanistan, about the role the diverse American and foreign agencies inside and outside the USA played in the outrage which was 9/11. As usual, the victims were innocent civilians going about their daily lives.

If in 2001 Al Qaeda had the capacity to perform the most spectacular marketing coup in the history of terrorism (9/11), building on its previous attacks (Dar es Salaam, Tanzania and Nairobi, Kenya in 1998; Aden, Yemen in 2000), since then it has been perpetrating ever more rudimentary, though deadly, events: Istanbul, Turkey 2003; Madrid 2004, London, 2005 being the most widely referred yet since 2001, no less than 14,776 terrorist attacks have been carried out by Islamists, murdering 60,000 people and injuring 90,000 others in the widest myriad of geographical destinations.

While the spectacular terrorist events make the front pages due to the appalling effectiveness of their atrocities, the thousands of others which murder a handful of people or injure a few kids do not, unless they take place in Western Europe or the USA or against their interests.

Increased intelligence and covert operations by the authorities and increased vigilance by common citizens (the front line in the fight against terrorism) have reduced Al Qaeda’s intercontinental operating strategy to the realms of the lone, demented shoe bomber and some poor mixed-up Nigerian kid who set fire to his underpants.

Those who compare these events with the strategic brilliance of the 9/11 operation (however horrific its effects may have been) conclude that the capacity of Far Enemy Jihadism to strike successfully at massive targets has waned.

It is clear that International Islamist Terrorism exists and continues to pose a potential threat, while increased attacks in Pakistan and Afghanistan on its leadership, and intelligence elsewhere, has seen Al Qaeda’s ability to constitute the level of effectiveness it had from 1998 to 2001 reduced to crude attacks with little more than home-made equipment and far more Islamist terrorist attacks being perpetrated against regional competitors than against international foes.

International, yes. Dangerous, yes. Real, yes. Room for complacency, no. But does the spectre of an Al-Qaeda capable of carrying out massive terrorist strikes still exist? Time will tell. Until then, vigilance and intelligence at all levels, down to the common citizens, is the best form of prevention, while at a higher level, the leadership of the cause can be undermined through dialogue, through political inclusion and addressing the heart of the problem with a single weight and measure: the question of the Middle East.

The bottom line underpinning all of these strategies is to deprive the leadership of its foot-soldiers and this can only come through development. While the Soviet Union was internationalising development, the West was doing what it could to sabotage its models. The need for development is the constant factor in the fight against international terrorism.