Operation Cast Lead, which Israel conducted in the Gaza Strop in December 2008 and January 2009, echoed to two high-ranking Israeli officers. They stand accountable for the use of white phosphorus during the operation. It is the first time when Israel resorts to disciplinary punishment connected with Cast Lead. 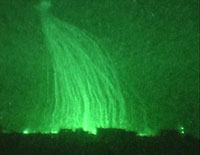 The UN General Assembly insisted Israel and Hamas conduct independent and detailed analysis of the events that took place in the course of the operation in the Gaza Strip in December 2008.

The United Nations Organizations accused the Israeli military command of the illegal use of white phosphorus during the above-mentioned armed actions. This chemical is not allowed for use in case civil people are present in the impact zone.

Phosphorus-constraining weapons can hit targets on large territories, up to several hundreds of square meters. Such weapons can cause severe and extremely painful injuries or even trigger slow death.

Spokespeople for the Israeli administration repeatedly stated that ZAHAL (or Israel Defense Force) used white phosphorus, but the attacks were not aimed against civilians. The weapons were used against Hamas gunmen to create a smokescreen.

Two high-ranking Israeli officials General Eyal Eisenberg and Colonel Iian Malka were accused of “exceeding their authority in a manner that jeopardizes lives.” The officers ordered to use white phosphorus to shell a complex of UN buildings in the Gaza Strip.

International rules allow the use of white phosphorus for creating smokescreen on open areas, although the use of such weapons is strictly forbidden in densely built-up areas.

Several phosphorus-containing shells hit the above-mentioned buildings located in the battlefield. Two employees of the UN mission and two Palestinians suffered severe burns as a result of the attack, on January 15, 2009. The buildings were damaged too.

The investigation of the incident started after several human rights organizations reported the illicit use of prohibited chemicals against the population of the Gaza Strip.

Israeli military officials still refuse to acknowledge the use of white phosphorus in Gaza. It was particularly said that the decision to punish the two officers did not mean that Israel agreed with the accusations presented in the Goldstone Report on the Gaza war. It was only a fact to prove that the Israeli legal system was unbiased and reliable.

The story with the “proper punishment” of IDF officers turned into a scandal after The Guardian journalists found out that the officers had already been punished last year. An article published in the Haaretz newspaper said that the two officers had been found guilty of committing a war crime.

Any further mentioning of the officers who allowed the use of white phosphorus in a residential area disappeared from the Israeli press.