The dark history of President Alvaro Uribe is well known for its seedy connections to narco-traffickers, terrorists and murderers. When Mayor of the City of Medellin, narco-terrorist death squads sent thousands of civilians to the most horrific deaths. Now, mass graves with thousands of bodies have been uncovered. 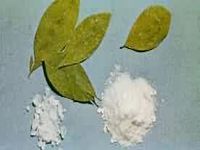 Columbia is covered in a fine white powder. It is called cocaine. The leaves of the coca plant are crushed and pounded with a solvent. Wax is then removed from the solution and hydrochloric acid is added to the remainder to separate out the cocaine alkaloids. The crystals that are left are dissolved with methyl alcohol, are recrystallized and dissolved in sulphuric acid

Millions of doses worth billions of dollars flood the streets of the United States of America, and other countries, every year destroying families, sending crime rates soaring, tearing society apart. The USA backed Colombia’s Mayor of Medellin, the epicenter of the narcotics trade, Álvaro Uribe in his bid for the Presidency of Colombia, despite his alleged links to AUC, a paramilitary group classified by Washington as a terrorist organization.

As Mayor of Medellin, in the early 1980s, the city was referred to as “The Sanctuary” because the city administration afforded protection to drugs traffickers such as Pablo Escobar, whose projects Uribe (son of the known narco-trafficker Alberto Uribe Sierra) supported. His chief of staff was Pedro Juan Moreno Villa, who controlled not only the cocaine precursor chemical industry (producing substances needed for the production of cocaine) but also the paramilitaries under whose reign of terror in the Department of Antioquia thousands of people disappeared, mainly Uribe’s opponents. During the 1980s, Uribe’s CONVIVIR vigilantes massacred thousands of civilians, before merging with the terrorist organization AUC.

As Director of Columbia’s Civil Auronautics Agency between 1980 and 1982, Uribe handed out pilot licences to the Medellin drug cartel, for which he was apparently dismissed. As Senator between 1986 and 1994, he consistently supported legislation favourable to the drugs cartels.

President of Columbia since 2002, Uribe has had the chance to hide away the skeletons in his closet. However, in his case there are so many skeletons that the door has burst open.

In the village of La Macarena, 200 km from the capital city Bogota, a mass grave with 2.000 bodies has been discovered. The bodies, unnamed, have been deposited there by members of the Columbian Armed Forces since 2005. Meanwhile there have been thousands of rumours of Trade Union leaders, peasant leaders and political activists suddenly disappearing in Columbia under Uribe’s reign of terror.

The mass graves have been uncovered after the admission of paramilitaries, who admitted that all the fighters in their units had to learn how to dismember people, “and this was often done when the people were still alive”. The organization these paramilitaries fought for? AUC.

Columbian sociologist Professor Alfredo Molano declares “The General Inspectorate itself speaks of 25.000 ‘disappeared persons’ so they had to be somewhere. There are enormous clandestine cemeteries in Columbia. It is also possible that they got rid of a lot of bodies in Nazi-style ovens”.