The War in Iraq Ended. Applause

Barack Obama delivered his first State of the Union address January 28. As everyone expected, the US President spoke about the questions connected with the economic crisis and the unemployment in the United States. 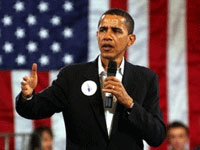 The War in Iraq Ended. Applause

He could not but praise himself saying that the actions his administration had taken allowed to create two million jobs.

“The worst of the storm has passed, but the devastation remains,” he said.

Obama also spoke about the presence of US trips in Iraq and Afghanistan. The spending on the anti-terrorist operation in those two countries has become an intolerable burden for the teetering economy of the United States. Obama promised to end the war in Iraq during his pre-election campaign.

“As a candidate, I promised that I would end this war, and that is what I am doing as President. We will have all of our combat troops out of Iraq by the end of this August. (Applause.) But make no mistake: This war is ending, and all of our troops are coming home. (Applause.)”

Up to 25,000 US marines have been serving in Iraq since 2003. Most of tem were quartered in Anbar province. Several thousands of marines are staying there still, but they will be sent home during the upcoming several weeks, according to Washington’s new doctrine. Some of them will stay in Iraq though – to defend the US Embassy.

As for the pull out of troops from Afghanistan, Obama was not that eloquent.

“In Afghanistan, we're increasing our troops and training Afghan security forces so they can begin to take the lead in July of 2011, and our troops can begin to come home. (Applause.) ”

The USA has been waging a war in Afghanistan against Taliban for eight years already. The situation in the region has aggravated a lot recently, and Obama’s administration decided to increase the contingent in this country. The number of US troops deployed in Afghanistan will reach nearly 100,000 people by the summer of 2010.

The current situation in Iraq does not give any serious reason to believe that the war in this country has ended. Three explosions ripped through the streets of Baghdad the day before Obama’s speech: 37 were killed and 104 wounded.

The Islamic State of Iraq claimed responsibility for the terrorist acts. The group, which is believed to be a branch of al-Qaeda, said that the acts were conducted within the scope of the campaign to liberate Iraq from occupation. The previous series of explosions near government buildings in Baghdad in the summer and fall of 2009 took over 400 lives.

New terrorist acts took place in the country 15 minutes after the news about the execution of Ali Hassan al-Majeed, known as "Chemical Ali", nicknamed so for his decision to use chemical weapons against rebelling Kurds in 1988.

It is an open secret that the Kurdish issue is a part of the US plan to federalize Iraq, which may mean that this country may repeat the fate of Yugoslavia. It is worthy of note that the leader of Iraqi Kurds Massoud Barzani had a meeting with US President Obama and Vice President Biden in Washington on January 25. Obama said at the meeting that he was supporting the federal structure of Iraq.

The oil-rich Iraqi province of Kirkuk presumably populated by the Kurds continues to ask for more authority. It is not ruled out that the Kurdish authorities may eventually announce their independence on Baghdad.

Washington does not seem to care much about such a scenario, because the Kurds remain the USA’s most loyal partners in Iraq.

As for the Arab population in Iraq, Shiites are disappointed with the politics of the United States and accuse Americans of their inability to do something about the activity of Sunni gunmen.

Has the war in Iraq really ended? Well, maybe it has, for Mr. Obama.