Give Obama a chance 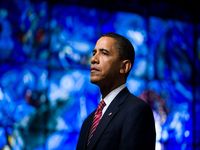 Give Obama a chance

President Barack Obama inherited a hot potato. Not only was the United States of America’s image ruined abroad after war crimes in Serbia, the imperialistic Kosovo debacle, war crimes in the illegal war in Iraq and the decision to back the murderous war criminal Saakashvili in Georgia after 2,000 Russian civilians were murdered in the most blatant cowardly act of treachery…its economic infrastructure was at breaking point after eight years of the Bush regime and the banking and economic sectors were in free-fall.

So President Barack Obama inherited a broken nation, with a deplorable record abroad, with a need to rebuild bridges which had been systematically dynamited for eight long years with the arrogance and insolence of Messrs. Bush, Cheney, Rumsfeld and Ms. Rice. President Barack Obama inherited an internal situation bordering on a nightmare, with thrift (mortgage) institutions bankrupt, millions of people unable to repay loans, companies closing, record levels of bankruptcies.

And people expected what? A circus act? A magician? A fairy godmother?

The “Yes, we can” campaign was a campaign of brilliance, a campaign based upon the very best that the United States of America has, which is so often either unnoticed or purposefully ignored by a foreign media that likes to pretend the USA is crude, rude, uncultured, raw, ignorant and “colonial” whereas in fact it is already, and slightly over 200 years old, a sophisticated country with pools of excellence in the fields of education and technology, where public services function, where people are free to say their piece, a country which although criminally misled at times, is nevertheless in general terms well-meaning.

The “Yes, we can” campaign surpassed that of the more experienced Hillary Clinton. And why? Because Hillary Clinton came from within the system, like Bush, and Cheney, and Rumsfeld, and McCain and Barack Obama came from without. He was not elected because he is black, because he isn’t. He is as much “white” as he is “black” and anyway what a wonderful comment the citizens of the USA made to the most sceptical international observers in electing him: race was not an issue and race is not an issue in the USA of today.

Every vote cast for Barack Obama in the USA was the reflection of the collective will of the international community, tired of the Clinton and Bush regimes riding roughshod over international law.

For the same reason that Mikhail Gorbachev was more popular outside the USSR than inside. Americans might be attentive as to the standing of their nation in the international community, those who have some kind of reason to be interested. Yet what Europeans do not realise is the fact that the USA is far larger than the European Union and has a myriad of cultures and realities between the East and West coasts…and why should the Americans be that worried about what goes on overseas?

People vote on domestic issues, they vote on what is going to affect them in their daily lives, and nothing else. The electorate is not stupid (with one exception, the re-election of the Bush regime attenuated by the non-event staged by the Democrats).

The fact is that for domestic policies to be formulated and implemented, there exists a political formula which has a life-span of seven years. Therefore those who look towards the smaller picture, claiming that the unemployment rate under Bush was 7% and under Obama, 10%, claiming that bankruptcies have soared by a million, and then complain, basically know nothing at all about macro-economic timetables and therefore have no credence whatsoever in their complaints.

So what is happening in the USA?*

The failure to elect a Democrat to Senator Ted Kennedy’s seat seems to have assured that the enemies of all of Obama’s initiatives will now be able to sufficiently block his efforts in every sphere.

The US population, it seems, is now prepared to ingest their own vomit. They lost their memory of the disastrous Bush administration very quickly and have succumbed to the empty deceitful rhetoric of the elites again, generated largely by desperate insurance companies and corporate interests who envision that the last thing the country’s resources will be spent on is for the welfare of its own people. Heaven forbid a touch of human “socialism” makes the lives of American citizens healthier or more secure. That is not allowed.

Additionally, the latest airline “terrorist incident” has made them even more willing to accept additional measures that violate privacy and human rights. These include racial or ethnic profiling, the setting up of privacy-invading databases and the introduction of new technologies, such as body scanners, without proper assessment of their possible ramifications on human rights.

Another indication that nothing has changed is that the utter failure, George Bush, who bungled Hurricane Katrina in the worst possible fashion, is now fund raising for Haiti.

Why is the US placing men and materials so close to the border of Russia? Throw away that reset button. It was all a sham and a farce. A match needs to be placed on everything to do with START, which won’t be worth the paper it gets written on. Absolutely everything in every realm with the US needs to start from scratch.