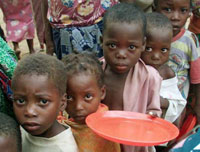 The name Sudan originates from Arabic “bilad al-sudan” which translates as “the country of blacks.” Arabic is the official language of the country, and Islam is the official religion, but the majority of natives neither speak Arabic nor practice Islam. About two million people have died during the armed conflict between the Muslim north and the Christian south.

Hardly had the civil war in Sudan ended (1983-2005) when the country faced an armed conflict in its western province, Darfur. Over two million people fled Darfur, more than 200,000 were killed. The relations between Sudan and another African country – Chad – exacerbated because of the conflict. Experts say that the conflict in Darfur may develop into a large-scale regional war.

The UN currently conducts two peacemaking operations in Sudan: one in the south and the other one in Darfur. About 10,000 servicemen of the international peacemaking contingent are currently deployed in the country.

UN Secretary General Ban Ki-moon made a speech last week in connection with the fifth anniversary of the signing of the Peace Agreement which marked the end of the civil war in the south of Sudan. The official stressed out that the implementation of the agreement would be a top priority for the United Nations in 2010.

The agreement particularly stipulates the independence referendum in Southern Sudan in 2011. Ban Ki-moon stated that the sides must already start the talks about the future relations between the two parts of the country no matter how the referendum may end.

Sudanese President Omar al-Bashir promised to agree with any outcome of the referendum in the south of the country. The president seems to be quite easygoing, although he most likely attempts to make his power in the country more legitimate. It is very important for Bashir to demonstrate his democratic qualities to the West, especially after he was charged with war crimes and crimes against humanity in March of 2009.

The president committed a heroic act: he stepped down as the commander-in-chief of the armed forces since the 2007 law about political parties prohibits political activities combined with military service.

Many analysts said that al-Bashir, who seized power in the country 20 years ago as a result of a coup, would violate the law and continue to control the army over the fear of being toppled by his successor.

The first democratic election since 1986 will take place in Sudan in April. The alliance of 20 pro-governmental parties supported Omar al-Bashir as a presidential candidate. Britain promised to allocate $87 million to organize the election campaign and recreate the Southern Sudan.

Observers say that a democratic election in Sudan – the country, where there are no political liberties – does not seem to be possible. How can the vote in Sudan be national if it is still impossible to stabilize the situation in the south of the country? Sudanese tribes may often come into armed conflicts too. The most recent tribal clash, for example, ended with 140 deaths.

Frequent outbreaks of violence may eventually lead to a new civil war in the country. Many local residents do not see a point in conducting the costly presidential election prior to the referendum because the country will most likely break up into several new states. Therefore, Sudan may repeat the history of the Balkan states.