Haiti Never Had a Chance

Poor Haiti. And why is Haiti so poor? Because right from the beginning, since its conception as a free and independent nation, foreign powers did all they could to place a stone around the neck of the fledgling state. Its inhabitants, born into slavery, were never given a chance, despite the fact that Haiti is the true America. 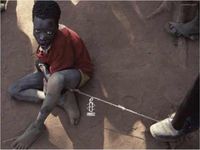 Haiti Never Had a Chance

For “people” like Pat Robertson, former Presidential candidate for the Republican Party, Founder and Chairperson of the Christian Broadcasting Network, the earthquake was visited upon Haiti because, in his words, “they got together and swore a pact to the devil. They said we will serve you if you’ll get us free from the French. True story”.

There are no words to reply to such pig-headed, unadulterated ignorance because there is no vocabulary to describe the ideas of such a simplistic, moronic, shallow and indeed, evil reaction to the plight of three million people, who as Pat Robertson spewed forth his demonic venom, were having hands and legs amputated without anaesthetic.

Haiti is in the state it is in not because it made a pact with the devil, but because forces of evil here on Earth in Europe and North America decided the country would be a non-starter right from the word “go”. Indeed, before this. Haiti and the Dominican Republic are no less than Hispaniola, the isle on which Christopher Columbus landed. This is America.

The Taino people who lived there were systematically massacred by the Spanish, who quickly filled the sugar and coffee plantations with slaves from Africa during the 1500s and 1600s. Haiti’s fate as a territory was signed in the United Provinces, in Europe, at the Treaty of Ryswick (September 20th 1697) which ended the Nine Years’ War between France on one side and Britain, Spain, the United Provinces and the Holy Roman Empire on the other: Hispaniola was divided between Spain, which took the eastern two thirds (Dominican Republic today) and France was given the western third, Haiti.

Haiti soon became France’s richest colony. It is difficult to state whether the French were less demonic than the Spanish. Louis XIV’s Code Noir, setting out conditions for slaves in the French Territories, had been passed in a decree in 1685 and immediately after the French rule began, the Haitians were subjected to its terms, among which were the permission for a master to execute a slave (Art. 33), to cut the ears off and brand with a hot iron, or cut the hamstring and brand again (Art. 38), to be chained and beaten (Art. 42).

While the Code also laid out conditions for the proper treatment of slaves and forbade torture, many colonial masters performed the most horrific acts of savagery, including boiling slaves in cauldrons, setting dogs onto them, drowning them, burying them alive or an old favourite, crucifixion.

One hundred years later, while France was in the throes of the Revolution, a Jamaican (literate) slave called Boukman Dutty led the Haitian Revolution against the hated slavemasters and proclaimed Independence in August 1791. This was the continent’s first Freedom Revolution and on January 1st 1804, the Republic of Haiti was officially constituted.

Due to continued French attempts to annex the new Republic militarily, the Haitian President (Jean-Pierre Boyer) was persuaded to buy the right to Independence through a loan from French banks, which basically sealed the fate of the new country through the whole of the nineteenth century. The loan of 90 million gold francs was equivalent to 21 billion USD today and even at the end of the century, over 80% of Haiti’s GDP was consumed by the capital and interest repayments to the French banks.

Did the USA help Haiti against oppression? Far from it. The United States not only refused to recognise the new Republic, but imposed an economic embargo until 1862. In 1888, the USA intervened military against the Government, in 1892 it was the Germans who supported an insurrection and from 1915 until 1934, the country was occupied by the USA, an action which gave the National City bank of New York the assets of the Banque Nationale d’Haiti.

US Control over Haiti’s finances continued until 1947 and laws were passed which opened the market to American imports. Ten years later, the USA placed the psychopathic dictator François Duvalier (Papa Doc) in power and he promptly installed a reign of terror promoted by the tontons macoutes (evil beasts), his presidential guard, which exterminated and tortured whoever was deemed to be an opponent of the one who now started calling himself “God”. Upon his death in 1971, he was succeeded by his son, Jean-Claude Duvalier (Baby Doc) who until fleeing to France in 1985, managed to finish what his father had started, namely the total destruction of the country’s society, leading it to the status of the poorest nation in the western hemisphere, with the highest illiteracy rate.

After a series of military coups, in December 1990, the socially progressive “Friend of the People”, Jean Bertrand Aristide was elected with 67% of the vote. He lasted a year, for the US ousted him in another coup in 1991. Three years of unrest culminated in the Clinton Administration reinstalling Aristide in 1994, but imposing a neoliberal reform programme which tore the country’s agricultural society apart and saw the country’s slum population soar. This was continued during the Presidency of René Duval (1996 to 2001), when Aristide was elected again, but removed by the USA in 2004, was kidnapped and shipped off to one of the remotest countries on earth, the Central African Republic.

Duval’s re-election in 2006 put an end to two years of total chaos but did nothing to end the economic Armageddon the country was in, where people died by the thousands in the most horrific slums the world has ever seen.

And now Pat Robertson has the audacity to say that these people have been punished by God for making a pact with the Devil? They never had a chance.