US skinheads planned to assassinate Barack Obama, Paul Schlesselman, a 19-year-old neo-Nazi said at the federal court of Tennessee last week. Schlesselman pleaded guilty to illicit possession of small arms and to the organization of the plot to assassinate then-presidential hopeful and Senator Barack Obama. Schlesselman and his associate, Daniel Cowart, 21, intended to get rid of tens of other African Americans. 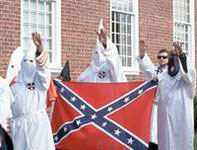 It is worthy of note that Obama received many threats from various radical groups on the threshold of the presidential election in the USA. Harry Reid released racist remarks during Obama’s campaign, which triggered a large scandal.

One has to give Obama credit for smothering up the scandal. However, that and other scandals on the subject, as well as the above-mentioned trial, may mean that the situation with the racial issue and its gloomy history (the Ku Klux Klan, Martin Luther King’s struggle, etc) is not so good in the United States.

The USA is a country that positions itself as the stronghold of democracy, human rights, liberties, tolerance and other values. Boris Pushkarev, an American of the Russian origin shared his thoughts with Pravda.Ru about the situation.

“As for Schlesselman’s case, it is a far-fetched case, obviously. The authorities and even the defendants engineered the story although there are serious dislocations about it. Prosecutors said that the two young neo-Nazis decided to assassinate Obama to save the United States from the greatest shame in its history. “Blacks want to come to power but we won’t let it happen,” that was supposedly their slogan.

“However, they decided to kill him in a strange way. At first they intended to rob an arms store, but failed. Nevertheless, they were charged with illicit possession of arms. Here is another curious detail. The guys, as prosecutors said, wanted to kill Obama after they kill dozens of other African Americans. That does not seem to be likely at all.

“The scenario of their actions looks like an unrealistic story which would not be good even for a Hollywood blockbuster. One has to pay attention to the fact that the charges are very serious – one may face lifetime sentences for such crimes in the United States. However, in this particular case it goes about an imprisonment of up to only ten years – not more than that.

“This whole story looks like a conspiracy between two young men and the PR department of the Democratic Party. Obama’s rating has been rolling down the hill because of Iraq and Afghanistan. He may not win again, during the next vote. Therefore, it is not ruled out that the story with the assassination of Obama has been made up to improve the president’s rating.

“There is no smoke without fire. There are racial and national problems in the USA. People of the Caucasian and Negroid races may often come into conflict with each other. In addition, white, black and Hispanic people are traditionally hostile against the Jewish community in the States. The time of the Ku Klux Klan is not a matter of the past. It is not the middle of the twenties, of course, when there were five million members in this organization.

“This organization is strictly forbidden in the country. There is no joint Ku Klux Klan per se, but there are about 8,000 active fighters working in various organizations, and it is very hard to neutralize them.

“One should not think that an American racist is a young skinhead, or a middle-aged individual with a swastika tattooed on his forehead. Racists have become more active in the country recently. They try to reach young people of the white race, first and foremost. They distribute leaflets that say that the majority of crimes are committed by people of other races. The economic crisis plays its role there too. Many Americans lost their jobs, and they can be hostile to their Asian or black rivals who are ready to work for smaller wages.