Haiti: Too Many Cooks…

The Earthquake devastated Haiti last Tuesday afternoon. On Sunday evening, five days later, only 60% of the disaster area has been covered, water is not reaching those most in need, heavy lifting gear is bottled up at the airport and the people are understandably getting desperate. 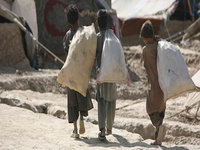 Haiti: Too Many Cooks…

For those who claim that the UNO had no contingency plans, it is a pity that international media can print or broadcast not only half-truths but also blatant lies. The United Nations Organization has been drawing up contingency plans for years, holds workshops regularly and constantly updates and upgrades its humanitarian relief capacity. Moreover, the Force 7 earthquake which hit Haiti was equivalent to an explosion of 400,000 tonnes of TNT.

How the UN Contingency Plans are drawn up and implemented

The department responsible for this area is OCHA, the UN Office for the Coordination of Humanitarian Affairs, which implements its policies through UN Resident Coordinators and Humanitarian Coordinators in Regional Offices, Field Offices and Natural Disaster Response Advisors. There are three steps:

Assess and monitor vulnerability and risks

“The United Nations Resident Coordinators and Humanitarian Coordinators are responsible for ensuring the development and maintenance of contingency plans for humanitarian emergencies in their areas of assignment” states the UNO.

The Hyogo Framework for Disaster Relief was drawn up by the UNO and is geared towards “minimizing the impact of a disaster by strengthening the capacity to provide a timely and appropriate humanitarian response to the needs of affected populations”.

So, with all this in place, how to explain the fact that fundamentally important materials, five days after the disaster struck, are piling up at the airport? Especially in the light of the following statement by Secretary-General Kofi Annan in 2001: “A recurring theme of [UN] evaluations is the need for strong contingency planning, strengthened national disaster management capacity and disaster response coordination mechanisms, which include information management as well as regional cooperation. (2001 Report of the Secretary-General to ECOSOC [Para 3])

The UNO has described this crisis as its worst ever humanitarian disaster relief effort, estimating that 562 million USD are needed to help 3 million people over 6 months, 2 million people needing emergency relief right away. OCHA spokesperson Elisabeth Byrs states that “Fuel is the key issue” and it needed “to bring in supplies and carry the wounded”. There are 1,739 workers from 43 countries working in Haiti with 161 sniffer dogs.

Official estimates issued by the Haitian Government and backed by the UNO indicate a figure of between 50,000 and 200,000 deaths with a further 250,000 people injured, although Prime Minister Jean-Max Bellerive stated that 100,000 seems to be “a minimum”. The Pan-American Health Organization postulates a figure of 50 to 100,000 and other reports, based on a death rate of 20% of the population affected, indicate that 200,000 plus could be the real figure.

1.5 million people are homeless and with an absence of aid, five days on, looting has finally begun, two looters being shot dead by the police in Port-au-Prince today.

Only 60% of the affected areas are covered

The scale of the disaster is massive and eyewitnesses state that it is difficult to comprehend the magnitude of the destruction, which has left the country with a serious shortage of infra-structures.

The British team’s commander, Mike Thomas, declared to Sky News that the heavy lifting equipment “has been in the air three times to land here and refused permission to land, so it’s been mostly frustrating for us because we’re having to borrow kit from other teams”. His equipment? It is still across the border in Santo Domingo.

Dea Leahy, a lay missionary from St. Louis, Missouri, USA claimed today: “I don’t know how much longer we can hold out. We need food, we need medical supplies, we need medicine, we need vitamins and we need painkillers. And we need it urgently”.

In October 2008, Patrick Charles, former Professor at the Geological Institute of Havana stated that “conditions are ripe for major seismic activity in Port-au-Prince. The inhabitants of the Haitian capital need to prepare themselves for an event which will inevitably occur...”. His statements were printed in Le Matin newspaper, Haiti. Professor Charles added that “science has provided instruments that help predict these types of events and show how we have arrived at these conclusions.” Nothing was done.

As Fidel Castro recalls, why is Haiti so poor, poverty being the cause of the insufficient infrastructures, in the first place? “Why does almost 50% of its population depend on family remittances sent from abroad? Why not analyze the realities that led Haiti to its current situation and this enormous suffering as well?”

It is evident that five days later, people should not be dying of thirst. It is obvious that the immediate needs were lifting equipment, field hospitals and water. Why then is the equipment at the airport, why are field hospitals turned away and why has the water not been efficiently distributed? It is unacceptable that people are writhing around in pain without painkillers or medicines.

One thing however is clear. Haiti showed that the world can come together, that Humanity is beautiful, that actions of extreme generosity and courage take place readily and selflessly to help our sisters and brothers. And the spirit which saw the first uprising of slaves against colonial masters on the coffee and sugar plantations is still alive today. This spirit will see the Haitians through, together with the love, help and support of the rest of Humanity.

The United Nations Organization needs to draw up better and flexible contingency plans for all regions of the globe, designating more streamlined plans as to who is responsible for what and when, so that in any such eventuality, the mechanisms are in place to cater for the needs of 50,000 people, 500,000 or 5 million. Because too many voices shouting at the same time, too many aircraft arriving in a disaster zone together…too many cooks spoil the broth.