International aid is trickling into Haiti, 72 hours after the devastating earthquake which razed Port-au-Prince. 50,000 people have been buried, many more are lying in the streets or crushed beneath collapsed buildings. We take our readers around Port-au-Prince on a horrific excursion written by eyewitnesses. The first horrifying figure of 200,000 deaths appears. 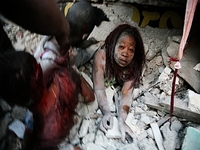 300,000 homeless…50,000 buried. Finally the aid starts to pour in to Haiti, to the tune of 90 flights a day, from China, from Russia, from Cuba, from the USA, from the UK, from Canada and from Latin America.

40% of the population of Haiti is under 15 years of age. The most optimistic estimates today are 100,000 dead, the most pessimistic 500,000. Interior Minister Paul Antoine Bien-Aime declared on Friday that “We have already collected around 50,000 dead bodies; we anticipate there will be between 100,000 and 200,000 dead in total although we will never know the exact number”. Other figures were forwarded by Aramick Louis, the secretary of state for public safety, who said 40,000 bodies have been buried and another 100,000 people probably died in the earthquake.

“We can’t cook. We don’t have electricity”

7.000 US nurses have volunteers to go to Haiti.

Ban Ki-Moon, UN Secretary-General: 50% of the buildings in Port-au-Prince have been destroyed or seriously damaged. The international response has been “robust” according to the Secretary-General but he admits Haitians are frustrated.

Hospitals: Stretched to the limit. Doctors and nurses insufficient. Lack of water. Pipes damages. No fuel. No generators. No power. Thousands of people needing hospital treatment wandering around or being carted round the streets in makeshift ambulances.

Reports of looting of food exist but have been grossly exaggerated, according to U.N. World Food Program spokeswoman Emilia Casella.