Catastrophic situation in Haiti with unconfirmed reports of hundreds of thousands of deaths. The sheer magnitude of the Force 7.0 Earthquake was visible seconds after it struck at 16.53 Tuesday afternoon in the enormous pile of dust settling over Port-au-Prince, witness to the collapse of thousands of buildings, literally swallowed up by the Earth. Yet what is amazing is the spirit of the people of Haiti. 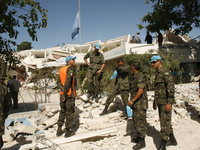 Haitian President Preval: "You have to see it to believe it. Lots of houses destroyed, hospitals, schools, personal homes - a lot of people in the street, dead."

Jean-Max Bellerive, the Haiti Prime Minister, has already declared that the number of deaths could rise to well over 100.000, which according to some reports could be a conservative estimate.

The tremendous aftershocks (5.9 and 5.5 on the Richter scale) brought down what the original quake did not destroy in this city of three million people, a vast swathe of which has been razed to rubble. Hundreds of buildings are down and the number of people trapped under the rubble has yet to be calculated.

Russia’s Emergency Ministry is preparing a huge disaster relief effort. Dmitry Medvedev has ordered a Russian mobile hospital to be sent to the island. On Thursday an Il-76 aircraft will arrive in Haiti with 45 people aboard, including 20 doctors. The mobile hospital will have the capacity to receive 50 patients at a time and has an intensive care unit with 6 to 10 beds.

President Medvedev has sent his condolences to President Rene Preval

The noble people of Haiti

To note, the tremendous solidarity among the people of Haiti, who are helping each other out the best they can, creating makeshift hospitals in the backs of cars, mobile clinics on the trunks of vehicles, carts turn into ambulances, expertise is pooled, no widespread looting is reported.