China performed a successful launch of an ABM interceptor missile. The test became an important link in the creation of the nation’s missile defense system, news agencies reported January 11. 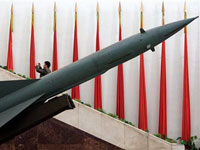 China is not the most open nation in the world – there is very little information about the defense industry of this country. Therefore, news reports about the above-mentioned test-launches were not abundant with details. It was particularly said that China launched the ground-based missile to test the technology to intercept the missile from the ground. The types of weapons involved in the test were not exposed.

The tests were conducted inside China, far from the borders. An official statement from the Foreign Affairs Ministry of the nation said that the tests had been conducted for defensive purposes and were not aimed against any other country.

It is worthy of note that the event took place only several days after China’s relations with the United States were marred with a scandal connected with Taiwan. It transpired on January 7 that the Pentagon approved the deal to sell state-of-the-art military hardware to Taiwan – Patriot missile systems.

It is an open secret that the Chinese administration is very sensitive with it comes to Taiwan, which China considers a part of its territory. China suspended defense talks with the USA for three months in November 2008 when Bush’s administration announced a $6.5-billion arms deal with Taiwan.

China’s Foreign Affairs Ministry set out protests January 7 in connection with the USA’s plans to sign another arms deal with Taiwan. China urged the USA to refuse from the Cold War principles and respect its interests, including the right for sovereignty. China’s view of its sovereignty obviously implies USA’s non-interference in China’s relations with Taiwan.

A harsh statement from the Defense Ministry of China followed soon. It was said that the USA’s arms deals with Taiwan undermined the bilateral relations and stability in the region.

Chinese military officials said that they would have the right to take counteractions if the USA did not revise its approach to the issue.

The test-launch of the ABM interceptor missile could be one of the planned counteractions.

China develops both the missile and the radar constituent of the national defense system. It became known in November 2009 that China finished the construction of a radar station in the west of the nation. The station may become a part of the system to destroy US satellites. Some experts say that the radar station was built to detect Russian ballistic missiles too.

China started working on the national missile defense system 40 years ago after Mao Zedong ordered to implement Project 640 program. After the legendary leader died in 1976, the early warning system became a part of the national space program.

China regularly demonstrates its military power to the world. The most recent and notable demonstration took place on October 1, 2009 when a large-scale military parade was held in Beijing within the scope of the 60th anniversary celebrations in the country.

China showed 52 new developments of its defense industry, including the dry-fuel CSS-X-10 ballistic missile and the JL-2 missile designed for submarines. It goes without saying that it was not the complete arsenal that China displayed.

The majority of experts believe that China has limited opportunities to intercept ballistic missiles. The situation may change, and the world’s most populous nation will succeed in the creation of the full-fledged missile defense system before 2020. One should bear in mind the fact that China, unlike the USA and Russia, is not going to sign any arms reduction agreements.

China currently works on long-range missiles that will be capable of reaching the territory of the United States. The distance from China to, for instance, Los Angeles, is almost the same as the one to Moscow or St. Petersburg.

As soon as China has its missile defense system, it will win the status of a global superpower which no one will be allowed to ignore.

Russia Today: China was not ready for democracy 20 years ago