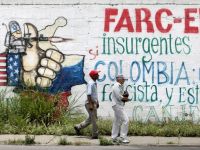 If Colombia is compared with the countries that it must be compared to, that is to say, with the capitalists who have left the trap of productive delay and generalized poverty, it is very bad. So much, that to continue like this, dragging in development because it only benefits a very few, it will remain a detainee to an economy in which small gaps coexist of modernity that are linked to multinational monopolies and the oceans of carefully searched economy with an inevitable corollary having a tendency to worsen: more plutocracy and less democracy and more corruption and more violence as irreplaceable mechanisms of economic, political and social ascent.

The enormous distance that separates Colombia from the developed countries is illustrated by its per capita income which is ten times lower and poverty that covers 60% of its inhabitants, while in the developed countries only 10% are affected. There is another difference that can be considered even worse: a growing gulf that separates us from the nations that are at the forefront of science and technology.

At this point the disaster has arrived that having ample land, we are increasingly dependent on imported food, and go for two decades of closures of industries while new ones are absent and the economy denationalizes and tends to specialize in the mining of multinational ones. To specialize in Mining! And foreign! As in a Spanish colony, whose independence is supposed to begin the celebrations! Clearly, such a country lacks even a moderately respectable future.

The disaster is much worse when noted that it has gotten worse during the governments of Alvaro Uribe, although it enjoyed an exceptionally high growth of the world-wide economy, growth and collapse and, in the best case, will follow a long period of economic mediocrity. The experience demonstrates that justifications of “free trade” will be able to serve as ideological loincloths for the measures taken in Washington to benefit the multinationals and a few natives, but will not remove the country from the crossroads in which it is.

Is Colombia, then, doomed to be an impoverished plutocracy, corrupt and violent? Of course not. The country has two key resources for the prosperity of nations, enormous natural wealth and an intelligent people, creative and hardworking as anyone else, as recognized in countries where many Colombians have had to go to work because in their homeland that elementary possibility is denied by a system that distributes wealth in the worst way and, worse, came the possibility of creating it.

Colombia will begin to solve its problems when a project of national unity from the direction of the State is implemented that has as its ultimate purpose the progress of all the nation and not only the select few that manage to separate their personal fate from that of their compatriots, so that only they do well whereas the rest of country is doing badly.

This project will have to defend, first, industrial and farming production, from the small one to the one of business, because it depends on the progress of a country like ours. Secondly, better living and working conditions for Colombians, because this must be the objective of all economic policy and because without that the nation cannot prosper as a whole.

Third, we need, in order to achieve authentic democracy, that is, to respond to the idea of governing for the overwhelming majority through democratic criteria, including the concept of rejecting armed struggle in Colombia as a way to handle social and political differences, as we have stated for decades. And fourth, the main thing: sovereignty, which means that we have to deal with all countries, including the U.S., but not with the relations of mule and rider, but with exchanges of mutual respect and mutual benefit.

Politically, we must build a unit as large as the social unit being proposed, ranging from workers and peasants to the non-monopoly businesses, through the middle of all sectors. The Alternative Democratic Pole constitutes one good base because it is a unitary project, an open door. But we must unite even more: the entire political spectrum to consider that the country is too bad, but can go ahead and organize to achieve what it requires which is a major project for national unity and progress as outlined.