Apocalypse in Haiti: Havana Predicted Massive Earthquake in Port-au-Prince in 2008

Patrick Charles, former Professor of the University of Havana, predicted in 2008 that there would be a massive earthquake in Port-au-Prince in the near future. Today, there was a Force 7.0 Richter, with an epicentre 14 miles from the capital city of Haiti. There are reports of massive damage, including a collapsed hospital. 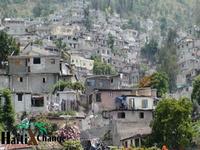 Apocalypse in Haiti: Havana Predicted Massive Earthquake in Port-au-Prince in 2008

Exact figures on casualties are not yet available but eye-witness accounts report chaos with many walls collapsed where houses used to stand.

The US Geological Survey confirms that the earthquake had a magnitude of 7 on the Richter scale and was centred 14 miles south-west of the capital city Port-au-Prince. Eye witnesses speak of a ravine filled with rubble where houses used to stand and there are reports that the Hospital in Petionville has collapsed.

In October 2008, Patrick Charles, former Professor at the Geological Institute of Havana stated that “conditions are ripe for major seismic activity in Port-au-Prince. The inhabitants of the Haitian capital need to prepare themselves for an event which will inevitably occur...”. His statements were printed in Le Matin newspaper, Haiti. Professor Charles added that “science has provided instruments that help predict these types of events and show how we have arrived at these conclusions.”

His predictions were based upon the fact that Port-au-Prince sits on a large fault line, part of the Enriquillo Fault Zone, which begins in Petionville and ends at Tiburon, which was razed twice by earthquakes in 1751 and 1771. He predicted that the minor tremors felt in Petionville, Delmas, Croix des Bouquets, and La Plaine in 2008 were a sign of something larger to come.

Professor Charles predicted that an earthquake of 7.2 or more would take place in or near Haiti’s capital with catastrophic consequences.