Ukraine’s sitting Prime Minister Yulia Tymoshenko will arrange a national revolution in case she loses the upcoming presidential election in the country to Viktor Yanukovich, the leader of the Party of the Regions. 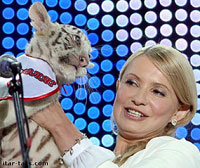 German scientist of politics Alexander Rar believes that Viktor Yanukovich has all chances to win the runoff election.

“If it happens, Yulia Tymoshenko will arrange a revolution and declare Ukraine a parliamentary republic. She may try to make Yanukovich become a politician whose power would be similar to that of the English Queen. This will lead to another political crisis in the country,” the scientist said.

According to the scientist, if other presidential hopefuls – Arseny Yatsenyuk or Sergey Tigipko – come third and affect either Tymoshenko’s or Yanukovich’s success, it will seriously change Ukraine’s political system.

“It will create a coalition of several political forces that will rule Ukraine after the second stage of the election,” Rar said.

Many experts believe that it is Viktor Yanukovich who is going to become Ukraine’s next president. The West is already prepared for such an outcome and even tries to have a positive look at the situation. The Financial Times, for example, believes that Yushchenko’s political debacle makes the Ukrainians choose the lesser of two evils. However, the newspaper wrote, Yanukovich would be the least of the evils. Ukraine needs political stability, whereas Tymoshenko is the opposite to stabilization, the newspaper believes. The Financial Times also wrote that Tymoshenko was as much guilty of the collapse of the orange movement in Ukraine just like Yushchenko was.

In the meantime, Ukraine’s sitting President Viktor Yushchenko recently said at a meeting with electors that the country would soon have “the Ukrainian prime minister.

“She needs to take a rest, at least for a little while, because every month of her work brings colossal poverty to our nation. Let her roll on the floor with her tiger [Tymoshenko’s election mascot] and finish her way in the Ukrainian politics.