Which is the first and only country in the world in which a soccer team has been machine-gunned? Angola. You can only sweep rubbish under the carpet for so long. Let us once and for all forget the hypocrisy and say some home truths about this country, heralded as some sort of Paradise. Nothing could be further from the truth. 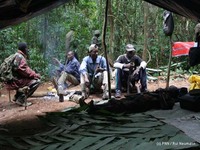 In 2008 Bob Geldof caused a commotion during a speech delivered in Lisbon, in which he claimed Angola is a country “run by criminals”. He rightly pointed out the enormous disparities in standards of living, in a country where the ruling elite from the Government Party MPLA live in luxury while the vast majority of the population struggles to make ends meet.

Many of Angola’s top officials are corrupt. Slush funds are a norm and not an exception and were a reputable auditor to pass a fine toothcomb through the books of Angola’s companies and executives, many, if not the majority, of the companies would be closed down and their executives would be thrown into one of Angola’s stinking prisons.

Yet Angola is heralded as some sort of Paradise, especially in Portugal where Government officials turn a blind eye to the flagrant lack of democracy in the country. According to the Constitution of Angola, the President is elected for a 5 years term (art. 59º) by universal, direct, equal, secret and periodic ballot. José Eduardo dos Santos has been in power for 27 years.

The Parliamentary elections of September 2008 (the first since 1992 when leading members of opposition party UNITA were massacred) were strongly criticised by the EU observer report (one Province, for instance, had a 108% turnout). "There was no safeguard against ballot stuffing and no means of verifying the unexpectedly high turnout figures achieved," the report declared.

The profile of Angola’s new elite are people who studied abroad, in Europe or the USA, who have no connection whatsoever with the people they are supposed to represent and who turn their backs on their African origins, native languages and culture. Yet despite the flagrant lack of democracy in Angola, despite the dreadful living conditions of vast swathes of the population while the corrupt elite perpetuates its existence through a system of bribes and commissions (in collusion with Europeans), countries and companies are lining up to sign lucrative contracts with one of the world’s fastest-growing economies.

While Angola is treated with a sickening degree of sycophancy like some sort of modern-day Nirvana and while too many a blind eye is turned by those too cowardly to face and tell the truth, the fact remains that the World Democracy Audit awards Angola a miserable ranking of 116 out of 150 points (1 being the optimum figure). The same report awards Angola 132 (from a scale of 1 to 149) for corruption, 94 in a scale of 1 to 150 for freedom of the press, 6 in a scale of 1 to 7 for political rights and 5 for civil liberties.

Therefore the shocking attack by FLEC rebels on the bus carrying the Togo national soccer team to the African Cup of Nations (in which three people were killed) cracks the varnish once and for all. You can only sweep the rubbish under the carpet for so long. True, it was an isolated incident and true, worse acts of terrorism have been committed elsewhere.

True, there has been a successful process of state-building after the end of the civil war which held Angola back from its independence in 1975 until the death of Dr. Jonas Savimbi (leader of opposition party UNITA) in 2002.

But let us tell the whole truth about Angola to help the Angolan citizens. It is not a bed of roses and never has been. Its ruling class has oil, and arrogance and while the people of Angola struggle to put food on the table, they think nothing of freighting a private jet and going on a shopping spree in Lisbon’s designer stores or jumping on a plane to go and see a soccer game, hosted by FC Porto.

The whole truth is that Angola, in broad terms, is indeed corrupt, horrifically badly governed and undemocratic. And those who cavort with criminals are as guilty as they are, in perpetuating the unjust society which feathers the nests of the few and gives nothing whatsoever to the ordinary citizens.