In 2009, the appearance of the H1N1 influenza virus saw the world brace itself for the first influenza pandemic since 1968. This was with the backdrop of the global financial crisis, that could negatively impact spending on health. 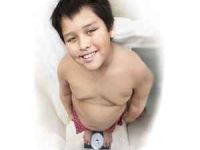 While there were concerns regarding malnutrition among children especially and hunger generally, in the developed countries such as the US there is a growing concern about obesity in kids. The University of Michigan in Ann Arbor states: "Public concern about childhood obesity is on the rise and it continues to outrank all other health problems as the No. 1 concern for children in the United States. This is the first year the three major racial/ethnic groups all agree,” says Matthew Davis, M.D., director of the poll. “In 2008, among whites, the chief concern was obesity, while among blacks the chief concern was teen pregnancy, and among Hispanics the chief concern was smoking.”

Meanwhile, 900 million people, are starving in the world every day. Every five seconds, a child in the developing world will die of hunger, which means that 17,000 children who were alive today will be dead tomorrow and that continues day after day after day. By the end of this week 120,000 children will have died from hunger and malnutrition, the equivalent of wiping out 10% of the population in Dublin in seven days.

The year 2009 finally saw H1N1 vaccines becoming available, global responses under way to support developing countries from the health effects of the financial crisis, and global action for public health being recognized.

WHO and UNICEF launched new plans to tackle the two biggest child killers – pneumonia and diarrhea, and the number of people receiving antiretroviral therapy in low- and middle-income countries topped four million.

Also, 2009 was dominated by discussion of a health care bill in the US, the only developed country not to offer health care to all its citizens. The health care reform bill, if passed into law, would be the biggest expansion of federal health care guarantees since the enactment of Medicare and Medicaid in the US. It would extend insurance coverage to an estimated 30 million additional uninsured Americans. Among other things, the House and Senate bills -- which still need to be reconciled -- require individuals to buy health insurance and prohibit insurance companies from denying coverage for pre-existing conditions.