The Decade of Latin America 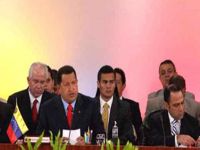 The Decade of Latin America

The 1990s was the worst that America has ever lived. The debt crisis - with its consequences: IMF, letters of intent, tax adjustments, etc.. - Military dictatorships opened the way for it to impose neoliberal governments in almost every continent. We became the world region with the greatest amount of neoliberal governments and their more radical procedures.

The responsiveness of Latin America has proven its ability to dramatically reverse this situation: we become the region that concentrates governments elected by the rejection of neoliberalism, which houses regional integration processes irrespective of the USA, which promotes innovative ways of integrating out the mercantile.

Latin American leaders such as Lula, Hugo Chávez, Evo Morales, Rafael Correa, among others, are regarded internationally for their ability to embody the needs of their people. Bolivia, Ecuador and Venezuela have joined Cuba, with countries that - according to UNESCO - ended illiteracy.

Countries that have opted for regional integration and not by free trade treaties, have expanded their economies, distributed income, advanced social rights of the population, notably extended the market for popular consumption, diversified trade and have significantly increased trade between them .

In the past decade, Latin America had been reduced to insignificance. Subordinate rulers - Menem, Fujimori, FHC, Carlos Andres Perez, Carlos Salinas de Gortari - had mechanically applied the same neo-liberal model, weakened the state, the sovereignty and the national economies. The governments of countries that had assumed the neoliberal program did not bother anyone, had reduced our states to subsequent losers of globalization, cheering at the expense of further deterioration of the situation of the peoples of our countries.

The first decade of the new century sees a new America, with the largest number of progressive governments that the continent has ever had. With regional integration processes strengthened - Alba to Mercosur, the South Bank of UNASUR, the South American Security Council to the Mercosur, among other initiatives. Operation Miracle was developed, which has been used to restore the sight of more than 2 million people, who otherwise would not have been able to regain their sight. They formed new generations of doctors for the poor in the best social medicine of the world – the Cuban – in the Latin American School of Medicine.

The economic crises of the previous decade, typical of neoliberalism, which weakened the capacity of national defense to speculative capital, which promoted, among many other crises, from Mexico in 1994, Brazil 1999 and Argentina in 2001-02, devastated the economies of those countries. Cardoso's Brazil left a country long and deep in recession for Lula, who has had to overcome the crisis with economic development policies.

In the end, Latin American countries that participate in the processes of regional integration - especially Brazil, Bolivia, Uruguay, Ecuador - overcame the crisis unleashed by the core countries of capitalism, which are still in recession that is to be extended further for a good time. They revealed their capacity to diversify foreign trade, to intensify intra-regional trade and then expanding the market for popular consumption.

Latin America shows the world today its face - imposed by the predominance of progressive governments - a continent in economic expansion, proclaiming its sovereignty - in economic, political and regional security - improving the social situation of the people, strengthening international policies involved in decisions on major global issues. It was, without doubt, this first decade of the century, the decade in Latin America, which projects into the second decade an example of the struggle to overcome neoliberalism with the construction of something fairer and more compassionate.