On 9/11, 2,974 people died as a result of terrorist acts in New York and Washington. The US government accused al Qaeda leader Osama bin Laden of the attacks. 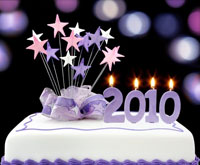 It began with the collapse of the US mortgage system. By September 2008, the crisis spread all over the world. Within the last year, thousands of companies declared bankruptcy, unemployment reached unprecedented levels, and the number of suicides linked to unemployment and collapsed businesses has greatly increased.

Most of the countries are saving their economies using their money. The world crisis-related spending exceeded 11 trillion dollars. Russia spent 480 billion dollars to fight off the crisis. So far China is the only country whose GDP is experiencing a steady growth.

Pharmaceutical companies have greatly benefited from the epidemic. Seven billion Euro worth of medication was purchased all over the world (in Russia, the creation of a vaccine cost 4 billion dollars). Sales of anti-virus medication Tummy Flu have increased more than four-fold up to 2.6 billion dollars.

On November 4, 2008, for the first time in the US history, a black Senator Barack Obama was elected the president of the United States. His slogan “Yes We Can” became a symbol of hope for Americans. Yet, the healthcare reform initiated by the new President attracted a great deal of criticism.

He promised to withdraw the troops from Iraq in 2010 and sent more troops to Afghanistan. He reset the relations with Russian and Islamic world. He shut down Guantanamo prison. He considered the Nobel Price he received this year an advance.

In 2001, after the first screening of the novel about a boy-wizard Harry Potter written by an English housewife J. K. Rowling, the world plunged into Potter-mania. Books and movies about the adventures of the young wizard are read and watched by both children and adults.

Mapping of the Human Genome

In 2003, a group of scientists headed by the Nobel Laureate James Watson announced that human genome (sequence of 25,000 nucleotides in chromosomes explaining the structure of human body) has been completely decoded.

The project was commenced in 1990; however, the interpretation of certain parts of the genome is at the initial stage. It is now possible to determine disposition for genetic illnesses. Using the genome information, scientists are hoping to win the battle against cancer and AIDS.

The princess of pop-music is the image of the decade. She is talented, scandalous, sexy and successful. After the 1990s that belonged to Madonna, it is time for “the naughty girl” to shine.

In 1999, her début album “Baby One More Time” received platinum status 15 times, and its title song topped the Billboard. She is the idol of the millennial generation. Millions of her albums have been sold, numerous Britney clones appeared on stage, her name became a brand, and scandals just increased her popularity.

Annual “gas wars” with Ukraine left Gazprom consumers in Europe without gas. Fights with Kiev forced Russia to seek other ways. By the middle of the second decade of this century, with the help of the Nord Stream and South Stream, Nabucco West and Russia will be able to continue power cooperation with the EU without mediators. “Gas wars” caused transition of the Russian gas to market prices for everyone, and Europe began spending more on alternative power.

The iPhone that hit retail stores in 2007 made mobile devices universal. Now they can assist with time management and other numerous functions, which make life much easier.

The search engine is the symbol of the internet technology for the Millennials. By the end of the 2000s, approximately 2/3 of the users in the world used Google for their search needs. Having created the best search engine ever, the company did not stop there.

Its free web applications help people store and download information and use thousands of other services.

Putin was elected the President of Russia twice, in 2000 and 2004. He laid the new foundation for internal and foreign Russian policies. Internally, he enhanced the power vertical, facilitated businesses participation in implementation of government projects and created “sovereign democracy.”

With regard to foreign policy, he determined Russia’s firm position in relations with the EU and USA, found allies in South America and South East Asia, and aggravated relations with Russia’s neighbors, Ukraine, Georgia, and Baltic countries. In 2007, he was named the person of the year by TIME magazine.

The Most Expensive Oil

A great drop in oil prices caused a reduction in the government funds. The budget deficit in 2010 will exceed 3 trillion rubles.

From August 8 to August 16 of 2008, Russia conducted a military operation on a foreign territory for the first time since Afghanistan, protecting South Ossetia and Abkhazia. A year later, the EU declared Saakashvili’s government the instigator of the war. Russia’s relations with Georgia are frozen.

The President of Russia was granted the right to personally make decisions regarding sending Russian troops on foreign territories. Independence of South Ossetia and Abkhazia is recognized by Nicaragua, Venezuela, and Nauru (Oceania).

A co-owner of YUKOS Oil was arrested on October 25, 2003, on charges of fraud and tax evasion. He was sentences to nine years of imprisonment, but later the term was reduced to eight years.

Removal of oligarchs from power has been going on for several years and takes different shapes. Berezovsky is hiding in London, Abramovich is selling Sibneft, and Vekselberg and Usmanov purchase valuable goods abroad and present them to the government.

On September 1, 2004, in Beslan School No.1 (North Ossetia), a group of militants took 1,128 people hostage, including children, their parents and school employees. They were held hostages for three days . As a result of unplanned combat assault, 334 people died (1% percent of the city population), most of the victims were children.

This was the most cruel terror attack in the history of Russia. After the attack, security was enhanced in all schools, and punishment for terrorism was made more severe.

Consumer credit became available to everyone. Everything and anything can be purchased with credit, from a cell phone to a country house. In the 1990s, credit was unattainable for the majority of people. In the 2000s, some banks gave loans within 30 minutes, and a passport alone was sufficient to obtain a loan.

With the crisis, those who took loans in foreign currency found themselves at a disadvantage since the foreign currency increased in price. Hence, overdue debts and confiscation of belongings purchased with credit. 26% percent of the population have unpaid credits, and 800 thousand families have mortgages. At the end of the decade, consumer credit and mortgage have virtually died out in Russia.

Russian Tennis Players Are the Best

In 2005, Maria Sharapova became the first world racquet. She won seven of the 17 largest international tournaments, including Wimbledon and US Open. A year later, Svetlana Kuznetsova took the second place in US Open and became the second world racquet.

At the Olympics in Peking, Elena Dementieva, Dinara Safina and Vera Zvonareva took gold, silver, and bronze. April through November of 2009, Safina was the first world racquet. Two Russians competed against each other in the finals of Roland Garros-2009, Kuznetsova against Safina.