The top United Nations envoy to Iraq today issued seasonal wishes to the country's Christians and to all Iraqis amid fears of a surge in violence targeting the country's Christian population. In a statement coinciding with Christmas Eve, the Secretary-General's Special Representative for Iraq Ad Melkert wished all Iraqis, and in particular Iraqi Christians, a very Merry Christmas and a Happy New Year. 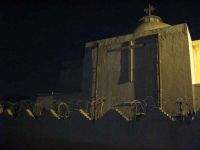 Iraq had a secular government under Sadaam Hussein. Christians and Muslims lived side by side in peace and harmony. Christians even had high positions in the Iraqi government, as well as small ones. They didn't have to fear for their lives or being the target of violence. Iraq's Christians have historically played an important role in maintaining the country's unique and rich societal fabric, and they continue to contribute to preserving national unity in the face of much adversity.

There are no specific statistics about the total population of Christians in Iraq now because of current instability. The Christian population before the U.S. invasion of the country, in 2003, was estimated to have been about one million, but since then because of bombing of their churches, killing, kidnapping and other terrorist attacks against members of the community by Islamic fanatics, more than half of the community has been forced to abandon their homeland and seek refuge in Syria, Jordan, Iran, Lebanon and other moderate countries.

This is the kind of government the US and the Israelis seem to have a major problem with. You have Iraq, Iran, Lebanon, Syria, Palestine...all of these countries have shown tolerance and friendship to their Christian minorities and have appreciated their contributions to their respective societies. However, you have places like Saudi Arabia, Azerbaijan and Turkey where Christians have been subjected to all kinds of abuses and genocide and guess what? The US and Israel are their best friends.

The modern militant form of Islam in the Middle East, even if it were not a bastard child of the Western neocolonial strategists, certainly has brought devastation to the region. Western interests have seen Nasser's pan-Arabism (Ben-Bela, Burgiba, Saddam Hussein, King Hassan) as a major obstacle to their economic and geopolitical interests. They believe that sacrificing the Christians in Iraq has been a price well worth paying even though it was not theirs to pay.

Christian churches in Baghdad, Kirkuk, and Mosul have been bombed throughout the war. Now, priests and others in Nineveh Plain say they pay large sums of money to Al Qaeda-linked militants in Mosul, the provincial capital, in exchange for protection for themselves and their churches. Christian churches are surrounded by barbed wire and fences where none were needed before.

The extortion has not kept Christians safe. Nearly every one has had a heart-wrenching story to tell about kidnapping, extortion, and displacement at the hands of Islamic extremists intent on driving Christians from the region.

"I had a choice: Convert to Islam, pay the tax, or give away one of my daughters," says a man originally from Baghdad, who was kidnapped two years ago and released only after his family paid a hefty ransom. Now, he's trying to leave Iraq for good.

The US-led invasion of March 2003 sent thousands of Armenian Christians fleeing to Armenia, Syria and Lebanon. Others have resettled in the United States, Sweden and Holland. Much different than in Saddam's Iraq, when special classes were allowed in Armenian language and religious studies.

At least 45 Armenians have been killed in the post-Saddam years of rampant insurgency, sectarian warfare and often unbridled crime, while another 32 people have been kidnapped for ransom, two of whom are still missing. On December 7, 2004, assailants firebombed a new church in the northern city of Mosul, an Al-Qaeda bastion, just days before it was to be inaugurated.

Like all Iraqis, Armenian Christians have also been caught up in car bombings, killed during robberies or in cases of mistaken shootings by the US military and private security firm Blackwater. Speaking of Iraq's hospitality and kindness after the Armenian Genocide, an Armenian Christian family declared, "We are indebted to the Arabs.  They did everything to welcome us. They allowed us to live and to rise in society, after Armenian survivors, many of them orphans, had arrived bare-footed from death marches across the desert."

The Iraqi army said its forces were put on alert in areas with significant Christian populations because of intelligence reports that they could be once again be subjected to attack as they have been continually since the American invasion set loose the elements of intolerance, fanaticism, criminality and fascism. For that, Iraqi Christians must be truly grateful to the Americans.

In the last month, there has been an increase in deadly attacks against Christians in Mosul, Iraq's second largest city. In October last year, more than 12,000 Christians fled Mosul following an upsurge in attacks, threats and intimidation. Some later returned.