US Politicians Should Mind Their Own Business

As though it was any of their business, six US senators have taken it upon themselves to warn France against the planned sale of a warship to Russia, saying the move has unsettled NATO allies and Moscow's neighbors and risks upsetting regional stability. This is while it’s their country doing everything it can to cause regional instability. 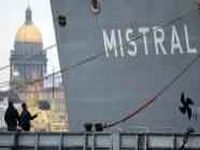 US Politicians Should Mind Their Own Business

"We fear this sale sends Russia the message that France acquiesces to its increasingly bellicose and lawless behavior," the senators, all Republicans, said in a letter dated Friday to French ambassador Pierre Vimont in Washington.

Excuse me? It is their country and their country alone that has been acting in an increasingly bellicose and lawless manner. How dare they accuse Russia of what they are doing themselves.

This sale is none of their business. The letter, first reported by Foreign Policy magazine on its website consisted of this motley group of senators: Jon Kyl, the number two Republican; John McCain, the top Republican in the Senate Armed Services Committee; Sam Brownback; James Risch; Roger Wicker; and Tom Coburn.

The sale to Russia is estimated at 600-750 million dollars and would be the first such deal between a NATO nation and Russia.

The senators were “worried” and underlined a Russian Navy commander's recent statement that the ship would have allowed Russian forces battling Georgia's military in August 2008 to land troops ashore in 40 minutes, against the 26 hours it took them to do so in last year's war.

Well that’s good, perhaps more lives would have been saved. But these saber rattling, arrogant Americans are still bound and determined to protect the criminal behavior of their puppet in Georgia. Of course their words make them nothing less than hypocrites of the worst kind, and accessories to the war crimes of Georgia and Saakashvili.

The truth is not in them, they either knowingly or ignorantly promote the lie that the war was Russia’s fault and of course Russia has no right to save the lives of citizens. Again, how dare they!

It seems no Republican has met a war or a lie they didn’t embrace with their entire hearts and souls. It’s part of the nature of the animal.