Almost one trillion dollars have been spent on the wars in Afghanistan and Iraq, yet in global terms, the eight objectives of the Millennium Development Goals (MDG) are falling pitifully short of their targets. UN Secretary-General Ban Ki-Moon has appealed for a strong presence at the 65. Annual Session of the UN General Assembly in New York in 2010. But do we not need to adopt an entirely new approach to the management of global issues? 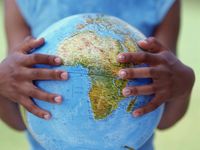 $945,724,444,245 to be exact, has been spend so far on two wars – Afghanistan (understandable) and Iraq (incomprehensible). While the United Nations’ (well-meaning) organisms try to make positive sounds about the achievement of the Millennium Development Goals, a closer look at the latest MDG report indicates alarming and pitiful trends which are wholly unacceptable for those of us who defend the existence of a world in which every single child should enjoy the very same rights and opportunities as a birthright, whichever side of an invisible border or frontier (s)he was born on.

New York set the stage for a commitment by word leaders back in September 2000 at the Millennium Summit, culminating in the UN Millennium Declaration, towards a new global partnership to approach poverty reduction in eight areas with time-bound targets (a deadline of 2015). Kofi Annan set up the UN Millennium Campaign in 2002 to foster support for the MDG and the Millennium Project was the result of this, namely a concrete action plan to achieve the goals. Its studies produced the report “Investing in Development: A Practical Plan to Achieve the MDG” by Professor Jeffrey Sachs (2005), the year of the World Summit in New York to take firm measures on global development issues.

While it is encouraging that the world’s leaders are pulling together, while it is encouraging that we have a President of the United States of America who as Senator in 2007 was deeply involved in the formulation of the Global Poverty Act, while there has been positive movement in a range of issues, it remains wholly unacceptable that while almost one thousand billion dollars is spent providing contracts to the arms lobbies (and blasting the faces off families across the globe) there is so much more to do and a real danger that the MDG will not be reached.

While in the northern hemisphere, the fat-cat bankers were receiving hand-outs despite having led the world’s financial systems into abject ruin, the global crisis pushed a further 100 million people into poverty. Ties with developing nations which continue to respect colonial ties from imperialist times, so often with political and financial strings attached (corrupt to rule) mean that the real issues governing global macro-economic management have not been addressed at any level.

And what is the result?

Although there has been some success in India and the RP China in reducing the number of people living on less than one USD/day, poverty rates have been increasing in western Asia, and little or no progress has been registered in Sub-Saharan Africa. How can people have equal opportunities in life if they are born to families with minimal buying power?

The number of children without access to primary schooling decreased from 103 million to 72 million from 1999 to 2006. However, in Sub-Saharan Africa only 71 per cent have access and 38 million children continue to be outside the school system. How can they have an equal chance if they do not even learn how to write their name?

Statistics show that a child born in a “developed” country is 13 times more likely to survive than one born on “the wrong side” of a frontier. 27 countries made no progress at all between 1990 and 2006 in terms of child mortality. Low education rates among mothers and children born in rural areas and into impoverished families are naturally most at risk.

500,000 women died during pregnancy, childbirth or in the 6 weeks after delivery in 2005. Ninety-nine per cent of these were in the developing countries. Gender equality therefore does not exist as a birthright – one in 7,300 women dies from preventable causes related to childbirth in “developed” countries, whereas in the Less Developed Countries (LDCs) the ratio is a mere 1:22.

The notion remains that more is contributed towards climate change from the number of rented limousines at UN meetings than from the hot air produced during the talks. Is humanity ruled by a clique of elitists who function as an old boys’ travel club, blind to the interests of Mankind?

If so, there is a real need for a new generation of accountable and responsible leaders who feel the necessity to serve the interests of those who elected them.

What we see today is wholly unacceptable. How anyone who claims to be intelligent or sensitive can celebrate the New Year 2010 defies logic.