Georgia, a former Soviet republic, was supposed to celebrate the 43rd birthday of its President Mikhail Saakashvili on December 21. As it was expected, there was no birthday party, but a huge international scandal instead. 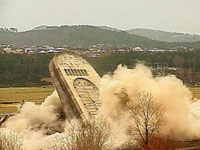 As we reported earlier, the government of Kutaisi, Georgia’s second biggest city, was anticipating a grand event – Mr. Saakashvili was supposed to visit the city on his birthday. The city government prepared a special gift for the president – the explosion of the War Memorial, which was erected in memory of the Georgians who fell in the Great Patriotic War. A new building of the parliament is to be built instead of the memorial.

The event failed to look like a celebration. The Georgian opposition was going to organize a protest action the day when Saakashvili was supposed to arrive in the city. Opposition members said that they would be ready to encircle the memorial to defend the memory of war heroes. The government of Kutaisi eventually decided to explode the monument on December 19.

The authorities did not put up any enclosure, not did they take other safety measures in an attempt to destroy the monument as soon as possible. Many people were standing near the moment when the explosion finally took place. A woman and her daughter were killed, some other people were wounded.

Saakashvili, who personally authorized the explosion of the war memorial, interrupted his trip to Denmark. The Georgian Security Council, which gathered for an emergent session, quickly found a scapegoat: the governor of the region was dismissed from his position.

The director of the company, which organized the explosion of the monument, was arrested too. In general, the unfortunate and infamous explosion ended with the arrest of ten officials.

Opposition activists gathered for a meeting in Kutaisi and harshly condemned President Saakashvili.

“It is Mikhail Saakashvili who is guilty for the deaths of innocent people. It is his maniac fear of history and deeds of true heroes that became the reason of the act of vandalism,” Koba Davitashvili, the leader of Georgia’s People’s Party said.

“There will be no parliament built here. Saakashvili won’t build the building of glass and concrete on the blood of his citizens, and his cowardly servants won’t be sitting there,” another opposition leader of Georgia, Zurab Nogaideli said.

Russia harshly criticized the Georgian administration for the explosion of the war memorial.

“The Georgian authorities committed an act of state vandalism, which humiliates the feelings of any civilized person. The sacrilege committed in Kutaisi is another shameful act conducted by the sitting government of Georgia in the maniac aspiration to erase the historical memory of its own nation,” an official statement from Russia’s Foreign Ministry said.

Russian officials reminded that the events in Kutaisi took place only one day after the UN General Assembly passed the resolution condemning attempts to either desecrate or demolish monuments to the people who died in the struggle against Nazism.

“Russia’s Foreign Ministry has a nasty habit to constantly interfere in internal affairs of other countries. The monument was seriously damaged in the 1990s, during the events, which Russia initiated,” an official statement from Georgia said.

The Georgian diplomats did not specify which events Russia initiated in Kutaisi during the 1990s. There were neither military actions , nor Russian army bases in the city . The statement is only a miserable attempt to shift the blame to someone else.

The European Union and the United States have not said anything about the events in Georgia. No wonder, for Saakashvili’s regime, which they support, is the regime of a barbaric politician who explodes the memory of war heroes.

The explosion of the War Memorial in Kutaisi has finally destroyed the reputation of the Georgian leader both inside and outside Georgia. He personally ordered to explode the monument in spite of the fact that the people of the Caucasus traditionally pay special homage to their war heroes. Saakashvili insulted hundreds of thousands of his own citizens.