Iraqi gunmen have learned to intercept secret data from US intelligence and use them in their purposes. It goes about the information collected by Predator unmanned aircraft. A program, which can be downloaded online for less than $26, gives the gunmen an opportunity to access video signals transmitted by unmanned aircraft. 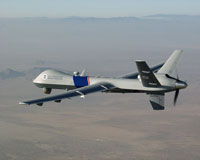 The software, supposedly developed by Russian programmers, works with the traffic from a satellite, unpacks files from it and saves them on computer hard drives according to specified filters. The warriors of the Iraqi resistance use the information to find out which objects the US intends to attack in the future.

The information first appeared in the WSJ, which referred to high-ranking defense and intelligence officials of the United States.

Mujahedeens, the newspaper wrote, generously shared the received information with many extremist groups. As a result, the above-mentioned program became a part of the standard equipment of an Iraqi gunman.

The authors of the article in the WSJ said that the gunmen could not intercept the control of the drones. However, their achievement minimizes the potential of unmanned planes.

The program is neither a hacking nor a pirate program per se. It was developed to access legal freeware. Who would have thought that Americans will be transmitting secret information via open channels?

The issue of the drone safety appeared for the first time during the middle of the 1990s, during the military operation in Bosnia. American specialists were working on the system to encode the signals sent to drones and from them. They eventually decided not to install the systems on the aircraft since they made the planes heavier.

The Pentagon apparently believed that the enemy would never be able to find out how to use such a drawback.

The Pentagon thought it wrong. The information proving that Iraqi Mujahedeens could intercept the signals from US drones surfaced in 2008. The laptop of a seized Iraqi gunman was found containing secret information of US air intelligence. Afterwards, in the summer of 2009, US servicemen seized several computers containing hours of recordings which Iraqi gunmen intercepted from drones.

Many countries of the world, including the United States, stake on the use of unmanned aircraft. Their share may make up to 36 percent of all other US aircraft already in 2010. They are particularly 375 MQ-9 Reaper drones, the cost of which amounts to $12 million each.

What is going to happen to the program of unmanned aircraft now?

Pavel Zolotarev, a senior expert with the Institute for the United States and Canada, said in an interview with Pravda.Ru that the drone program would not be revised because of the scandal.

Alexander Mordovin, an aviation expert, said in an interview with Pravda.Ru that the recent scandal in Iraq would obviously affect the development of the unmanned aircraft program.

“I believe that there is no program that can guarantee absolute protection against hacking. It’s quite possible that it was the US Defense Department that asked journalists to create the scandal to obtain more funding for the program. Drones will always be in demand. The only exception is a nuclear war because the impulse of a nuclear explosion puts all types of equipment out of order.