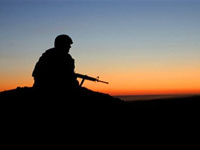 Just when it seemed that the US Army’s Human Terrain System (HTS) could not provide any more drama/distractions, on October 20th, in the District of Columbia Superior Court, Mrs. Montgomery McFate (Plaintiff) filed for divorce from Mr. Sean McFate (Defendant). The case will be heard on January 14, 2010 at 8:30 AM according to a court spokesperson (case number 09DRB3126). Sources say this was precipitated, in part, because Ms. Montgomery McFate, Senior Social Scientist, is expecting a child out of wedlock. Sources are adamant that this is the case though, for obvious reasons, the results of any “medical test” to confirm those reports can’t be verified. Whether true or false, the impending divorce will provide yet another distraction for an already distracted US Army program.

Mr. Sean McFate did not respond to voice mail or email in time for the deadline for this piece.

This report comes on the heels of the recent news that the US Army HTS had suffered a fourth non-fatal casualty. Sgt. Wesley Cureton was wounded and has lost the use of one eye and has suffered from other head trauma. He is currently at Walter Reed Army Hospital in Bethesda, Maryland. HTS management apparently felt no need to report the incident publically. When contacted, Robert Mueller, HTS spokesperson, indicated that he had no information on the matter and that “you should go through the hospital” to find out Sgt. Cureton’s status.

The US Army HTS has been plagued with troubles that continue unabated. Allegations of sweet-heart deals with personnel at the US Naval Post Graduate School to develop MAP HT, shell companies created by those connected to Fondacaro/McFate to absorb HTS funds, questionable business intelligence practices between contractors seeking HTS work, and HTS personnel resignations (“in disgust and sexual harassment at HTS HQ Fort Leavenworth have resurfaced again as the calendar year 2009 comes to a close. US Army HTS has continued to lower its recruiting and training standards (allowing the near-elderly into combat zones) and it is reported that in the transition from civilian contractor-run to government-run some time ago, fully 71 percent of employees walked away from the program.

Already there has been a murder/voluntary manslaughter in the program, three social scientists killed, US Army active duty personnel wounded whilst working with HTS personnel (beyond Sgt. Cureton), a 101st Airborne Investigation that found that HTS management was incompetent and allowed a hostile work environment to exist at FOB Ghazni, billing issues, etc.

The absurdity level in HTS is so high that the play Anthropology, based on HTS, wasstaged in 2009.

Yet, the US Army still refuses, on its own initiative, to audit this program in spite of the best efforts of investigative journalists, former and current HTS personnel downrange and in-CONUS (active duty and contractor, new beard, gray beard), and social scientists working through the American Anthropological Association. Instead, the US Army is content to have the program portrayed in the dazzling light of glory as in this recent piece in Time Magazine.

Those who support the HTS concept can only hope that Mr. Tim McLees and Mr. Andrew Tabler, staff members of the House Armed Services Committee, will see to it that a thorough, and legitimate, Independent Assessment of the HTS program is conducted by Secretary of Defense Robert Gates. Perhaps they will use committee subpoena powers to explore the many allegations of fraud and waste that persist in 2009. And perhaps they will look beyond the red herring of focusing solely on the American Anthropological Association as the number one sticking point and get the testimony of the people who believe that the HTS concept is sound if firmly embedded in and operated by the active duty US military. This is documented in Major Ben Connable’s Military Review article and by Major Ken Burke of 95th CA at Fort Bragg as cited by in the 25 articles that have been written by John Stanton.

The HTS program is bringing great discredit to the US Army. Personal and financial interest s is the prime motivation for much of HTS management contractors. Political and funding sources who have staked their reputations on HTS now find themselves wondering how to salvage their reputations in the face of so problems internal to HTS, chief among them what has been produced by HTS that is of any measurable value.

In late 2009, Wall Street, the film by Oliver Stone depicting Wall Street insider trading/fraud/corruption, has been running on the US cable television networks. The villainous Wall Street trader Gordon Gecko, played brilliantly by Michael Douglas, proclaims Greed is Good in one of the dramatic sequences. He comes to an appropriate bitter end. HTS should reach the same destination.

Perhaps HTS is a symptom of a larger problem w/the USA.

Someone or some group has to get past the It Philosophy whose foundations are “that’s just the way it is, it’s just the system, it is not my area of responsibility, I didn’t do it, and it is what it is”.

John Stanton is a Virginia based writer specializing in political and military matters. His most recent book is General David Petraeus’s Favorite Mushroom: Inside the US Army’s Human Terrain System. Available through Amazon and Wiseman Publishing. Reach him at [email protected]