Everyone at some point wanted to punch or at least throw a rotten egg in the face of a loathed politician. Some brave people managed to do it. 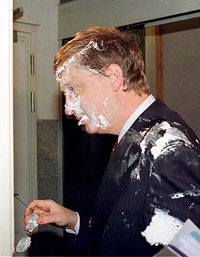 The tradition of non-lethal attacks on politicians is getting stronger. In Russia it is only the opposition who fall victim to flying cakes and other items. Yet, the world has enough fearless souls who are not afraid of messing with the powers that be, whether they are leaders of their country or visiting officials.

A recent attack on Italian Premier Silvio Berlusconi was different from many other similar attacks only in the method of execution. First, information agencies reported that an upset citizen managed to get access to the victim’s face. Later it turned out that there was no digression from the tradition, and a mentally ill man threw a replica of Milan's cathedral into Berlusconi’s face.

The most notorious of all precedents is obviously the flying shoes incident with George Bush. Exactly a year ago, on December 14, 2008, at a press conference in Iraq, a local journalist Muntadar al-Zaidi threw his shoes at George Bush. Bush managed to duck. Later, Muntadar was sentenced to a year in prison and then released ahead of time. He is thought to be a national hero by many in Iraq.

The most popular non-lethal weapon used by “public avengers” is an egg. It is impossible to list all incidents when “egg arguments” were used during election campaigns in Ukraine. In 2003 two high-ranking officials suffered from eggs, namely, California Governor Arnold Schwarzenegger and Russian Prime Minister Mikhail Kasyanov. They had a good company – Danish Prime Minister Fogh Rasmussen (2002) and US President Bill Clinton (2001, Poland), let alone scores of low-ranking officials.

The topic of baked goods is less researched. The most famous cake is still the one that landed on Bill Gates’ face in Brussels 11 years ago. Meanwhile, baked goods are a much better weapon. Although eggs have a longer hitting range, cakes are the weapons that rarely miss and the damage they cause is much more significant. Rotten eggs are great for undermining the enemy’s moral, but rotten pastries are equally good.

Recently, on October 26, 2009, Bolivian President Juan Evo Morales Ayma was celebrating his 50th anniversary. He gave a two hour speech to peasants of the mountain city of Batalla. After the speech, he was about to taste his birthday cake when one of the peasants grabbed it first and threw it into the President’s face. Interestingly enough, the President was not offended. It turned out he used to apply the same congratulatory tactics, and that it is perfectly normal in South America.

This is not true for Israel. In September 2003, a Jewish student from a New Jersey University threw a pie in the face of Natan Sharansky, Chairman of the Jewish Agency for Israel. It was later revealed that the “thrower” was Abe Greenhouse, a member of Jews Against the Occupation, the organization that speaks for the immediate withdrawal of the Israeli troops from the Palestinian territory.

Obviously, “the weapon of proletariat” is not extinct either. At the same time, “proletariat” remembers that cobblestones may lead to a charge with terrorism, and does not use it very frequently.

In August 2009, four hoodlums attacked former Prime Minister of Czech Republic Mirek Topolanek in South Moravia who was leading pre-election campaign riding his bicycle. First, they scolded Topolanek and then threw a stone at his head, injuring him. Strange enough, the incident has something to do with Berlusconi. Topolanek’s popularity in Czech Republic significantly decreased after a sex scandal, when the media published pictures from the Italian Prime Minister’s villa. One of the men shown in the pictures was naked, and looked like Topolanek.

In 1998, former German President Roman Herzog was attacked in Estonia by a 20-year old student who threw a stone at him. Luckily, the student missed, and the stone hit a car. Considering the fact that a German President is almost a ceremonial figure, the incident was dismissed as an act of vandalism.

There are plenty of other throwing weapons. In 2004, Mikhail Zurabov, Russia's Minister of Public Health and Social Development, was hit by a mayonnaise bag while speaking about advantages of outpatient care over inpatient care. At some point, there was a trend of splashing each other with the content of your glass. However, due to a low hitting range of the liquid weapon, it is only applied in close contact, i.e., conflicts with colleagues (the most famous Russian master of close combat art is Vladimir Zhirinovsky). All in all, the sky is the limit when it comes to the choice of a throwing weapon.

These incidents have a common trait. Albeit naïve, they are still much better than open terror and more honest than complete indifference. In some sense, the throwers are martyrs who are prepared to suffer for a second of utter happiness. The moment when an egg thrown by you hits the face of a loathed politician, you feel that you live your life to the fullest.